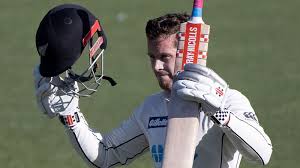 The second day of the ongoing New Zealand-Pakistan test match at Christchurch has seen the visitors at their shoddiest fielding form. Pakistan dropped as many as 3 catches on the day: two of Henry Nicholls, and one of New Zealand captain Kane Williamson. The lost opportunities would later go on to cost the men-in-green big time; as Nicholls and Williamson stitched a game-defining fourth-wicket partnership of 215-runs to put the hosts in the driver’s seat.

New Zealand ended the day on 286/3 with a deficit of just 11-runs. Williamson notched up his 23rd test century, remaining unbeaten on 112. Nicholls, meanwhile, finished not-out on 89 and is well poised to get to his 7th test hundred by tomorrow. The Southpaw had Lady Luck smile on him on more than one occasion. Besides the aforementioned dropped catches, he found a reprieve early on in the 32nd over when he nicked a delivery to captain Mohammad Rizwan behind the stumps; only to discover that Shaheen Afridi overstepped his crease!

But that no-ball was just one among several frustrating play aspects that the Pakistani pacers had to deal with today. Mohammad Abbas (20-7-37-1) and Shaheen (19-5-45-1) started the day brilliantly, leaving the hosts reduced 66/2 by lunch. Faheem Ashraf (18-4-55-1) further advanced that advantage by getting rid of Ross Taylor in the 30th over. Post Taylor’s dismissal, though, things just went downhill for the tourists.

Nicholls’ freakish reprieve just before stumps perfectly summarizes the torrid kind of day Pakistan were made to endure today. In the 80th over, Shaheen bowled a sharp delivery angling outside off and managed to produce a thick edge of Nicholls’ bat. Rizwan made a sharp dive to his left, and it seemed as if the tourists had finally earned some much-needed respite…only for the umpires to spoil their moment of glory!

As it turned out, Rizwan couldn’t quite hold on to the moving ball and ended up dropping the catch. Williamson, who was positioned at the other end, was quick to notice this, and immediately conveyed the same to the on-strike Nicholls.

But it was straight umpire Chris Brown’s reaction that really amused everyone. Brown didn’t even wait to confirm if the ball had lodged in the keeper’s gloves before lifting his finger. But once he realized what had happened, he quickly pulled his arm back! Even the on-air commentators couldn’t control their laughter at the confusion. Here’s the video:

The umpire didn't even wait for the ball to be lodged in Rizwan's hands before raising his finger, the catch was that easy. #NZvPAK pic.twitter.com/XWLsynN0gi