NZ vs WI: Shimron Hetmyer turns a six into a catch with an outstanding effort

The one-handed stunner from Shimron Hetmyer left the commentators and his teammates in a state of surprise. 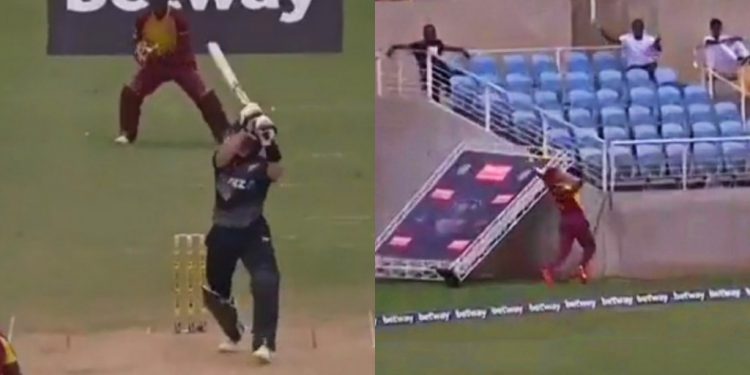 Mitchell Santner, Kane Williamson and James Neesham helped New Zealand register a 13-run-win in the 1st T20I against the West Indies that was held at Sabina Park, Kingston. However, the Balck Caps’ limelight was stolen by an outstanding catch from Shimron Hetmyer.

The effort came in the first innings after Nicholas Pooran had put NZ in to bat.

Shimron Hetmyer turns a certain six into a catch

The opening pair of Devon Conway and Martin Guptill had made sure to get off to a bright start. The visitors were cruising and the run rate at the end of the seventh over was @8rpo.

Finally, the opening stand was broken in the 8th over that Odean Smith bowled. Nonetheless, it was majorly the fielder’s miracle that resulted in the first wicket.

The third ball of the over was ordinary as hell –a short and wide paceless bouncer– that Martin Guptill crashed hard and high to the point region looking to shift gears.

Regardless, the shot that looked like a certain six turned out to be Guptill’s demise as Shimron Hetmyer made an outstanding effort in athletics.

Running in from square (roughly) Shimron ran to his left before timing his jump perfectly to gulp the ball in his left hand before it could soar over the ropes.

What a catch from @SHetmyer! A display of brilliant athleticism to get @Martyguptill's wicket.

Watch all the action from the New Zealand tour of West Indies LIVE, only on #FanCode 👉https://t.co/6aagmd7vyt@windiescricket @BLACKCAPS#WIvNZ pic.twitter.com/oAmqHi8sy0

The one-handed stunner from Shimron Hetmyer left the commentators and his teammates (a couple of whom batted him on the back for the incredible effort) in a state of surprise.

The on-air commentator quoted, “Brilliant from (Shimron) Hetmyer. Outstanding. It was hit by the wind. That is as acrobatic as you’d see.”

Overall proceedings concerned, NZ ended up scoring 185 for 5 off their 20 overs. The hosts in return could only put 172 and lost the game by 13 runs. They have a lot of chinks in their armour.