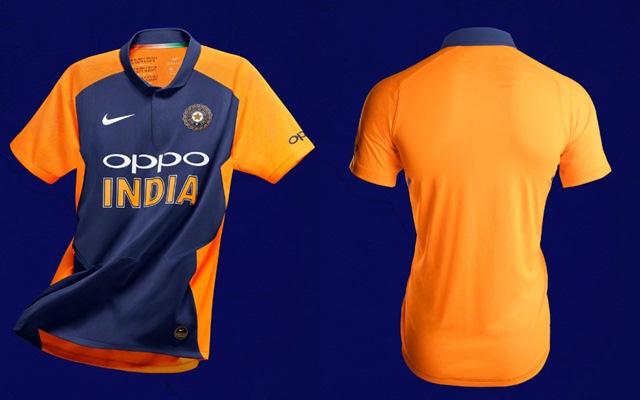 Today on Friday, Nike the officially sponsors of Board of Control for Cricket in India (BCCI) has announced the version-2 of Team India Jersey. India will play their first clash in Orange Jersey on 30th June, 2019 against England.

Reason Behind the Launch of New Kit:

International Cricket Council (ICC) recently have passed the information to the World Cup participants teams. That every team have to get ready with two colors of Kit for the ICC World Cup 2019 except the host team. Both Jersey’s will be for Away and Home matches.

As many team’s Jersey color is almost same. So in order to make some difference ICC comes up with this method. The reason for elimination of host from this process is that they have to play all the matches as home team. So they have the right to choose their color.

Srilanka and Afghanistan has been already sported in the away Jersey. Now Team India have launched their Away Jersey as Orange Jersey. India will play their first match in Away kit against England because they both have same color of Jersey.

Board of Control for Cricket in India (BCCI) took social media handle to release the official Team India Jersey version 2:

“Presenting #TeamIndia‘s Away Jersey
What do you make of this one guys? #TeamIndia #CWC19″

Presenting #TeamIndia's Away Jersey 🤩🤩🇮🇳🇮🇳 What do you make of this one guys? #TeamIndia #CWC19 pic.twitter.com/TXLuWhD48Q

On the coming Sunday, India will be looking in Orange Color. But today when BCCI released the Jersey, twitter reacted hilariously. Some fans liked the design and color of the Jersey, but some are disliking because of Political reason. Here we are sharing some twitter reaction over the color and design of the New Jersey.