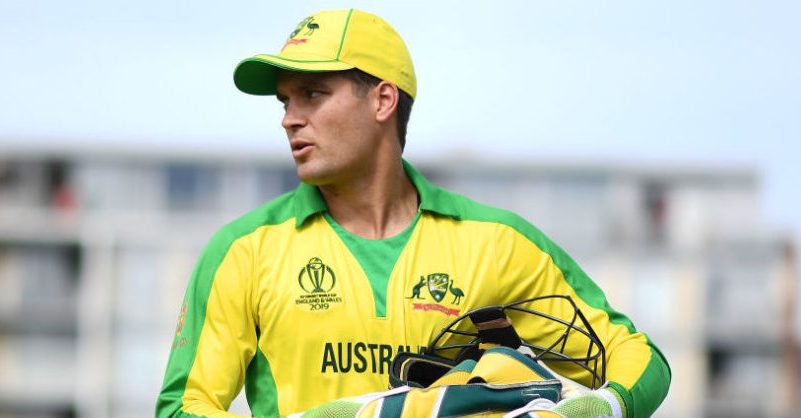 There was absolute drama in the first T20I played between England and Australia at the Rosebowl in Southampton which saw England run away with a narrow 2 run win. Not for the close finish but a bizarre incident during the England innings was doing the rounds on social media. Fans had an outburst on Twitter after Alex Carey and Glenn Maxwell try to trick Umpire with ‘fake hit wicket’ dismissal.

Alex Carey Inflict Fake Hit Wicket Dismissal
In one of the most bizarre, or we’d rather call it the stupidest things to happen on a cricket field, it was Australian once again part of the controversy. Aussie keeper Alex Carey acted slyly knocked the bails off and made it look like a hit wicket dismissal.

It happened in the 16th over of the England innings, batsman Tom Curran had punched the ball towards deep extra cover for a single. The Aussie keeper had knocked the bails off, on seeing which bowler Glenn Maxwell went up in appeal for hit wicket. The umpire has no clear judgment of the dismissal went up to the third umpire. As onscreen visuals cleared showed the bails were knocked off by the Keeper’s gloves and not by the batsman. Thereby, ruling the batsman (Curran) not out.

A tentative appeal for hit wicket from Australia but it was Alex Carey who dislodged the bails!

Alex Carey claiming for wicket 😂😂 give it over

Alex Carey knocks the bails off himself and then Appeals for ‘hit wicket’. #ENGvAUS pic.twitter.com/wxcwOYJj7f

Alex Carey is from Delhi, He is in Ashwin team.

The talk, however, was about Carey and the dismissal ….rather not a dismissal which he inflicted.