Arjun Tendulkar is part of Mumbai Indians squad since IPL 2021 but has yet to make his debut. 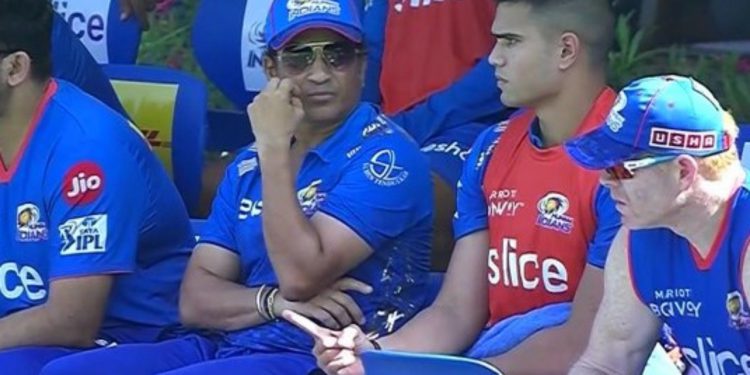 Batting maestro Sachin Tendulkar’s son Arjun Tendulkar couldn’t manage to get a single game in the Indian Premier League (IPL) for the second season despite spending a lot of time with the Mumbai Indians (MI) set-up, who bought him in IPL 2022 mega auction as well.

Arjun, a left-handed batter and fast bowler, has been warming the bench for 28 IPL games when the five-time Indian Premier League champions lost 10 matches out of the 14 they have played in the IPL 2022 season and finished at the bottom of the points table as well. Many thought Arjun will make his debut in IPL 2021 itself considering the fact that his father Sachin Tendulkar is the mentor of the franchise as well. However, things didn’t go down as per the plan.

Meanwhile, Sachin Tendulkar had something else to say as well.

“This is a different question. What I am thinking or what I feel is not important. The season is already over,” Tendulkar said at a show ‘SachInsight’, when he was asked whether he would have liked to watch Arjun play this year.

“And my conversation with Arjun has always been that the path is going to be challenging, it is going to be difficult. You started playing cricket because you are in love with cricket, continue to do so, continue to work hard and results will follow,” further added Tendulkar.

The 22-year-old Arjun has only played two T20 matches for his domestic side Mumbai and played in the ‘T20 Mumbai’ league as well.

Meanwhile, Sachin Tendulkar retired from the IPL in 2013, after Mumbai Indians won their first IPL title under Rohit Sharma as well, but the legend has become their mentor later on and he is usually seen sitting in the dugout along with the coach Mahela Jayawardena and other support staff as well.

ALSO WATCH: R Ashwin refuses to give strike to Riyan Parag on last ball, the latter wasn’t pleased after being run-out

“And if we speak about selection, I have never involved myself in selection. I leave all these things to the (team) management because that is how I have always functioned,” Sachin Tendulkar concluded.