Virat Kohli and co. were livid with Broadcaster 'SuperSport' for the ball-tacking they showed. 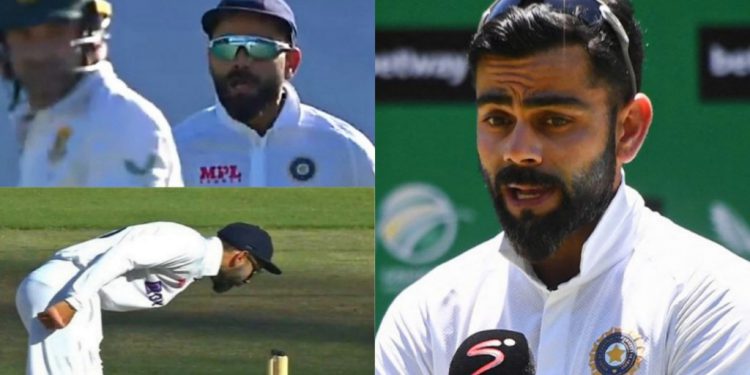 A 7-wicket loss in the deciding match of the series resulted in India suffering a disappointing 2-1 series defeat in South Africa. The series had its fair share of moments that went down to the wire and could’ve gone in either team’s way- if that’s any consolation. But in end, South Africa emerged as the team that more ably managed to hold its nerve in the heat of situations, and that’s the reason they finished victorious.

Meanwhile, the Indian contingent had some interesting observations to make about the decision-making technology being used in the game. On day 3 of the test match, captain Virat Kohli, R Ashwin, KL Rahul, and Mayank Agarwal were heard airing their frustrations about a ‘controversial’ LBW ruling against Dean Elgar.

The general consensus of the players’ gripe was that SuperSport, the broadcasters of the game, had unfairly rigged the HawkEye feature of the Decision Review System (DRS) to favor the hosts. Ashwin remarked that SuperSport shouldn’t resort to such tactics to ensure the home team a win. Mayank and Rahul claimed that the whole South African country was playing against the Indian team.

But the most animated reaction came from Kohli himself, who walked over to the stumps and literally shouted into the mic, “Focus on your team as well when they try to shine the ball, and not just the opposition. Trying to catch people all the time. Some DRS we are using (sic).”

Such a livid reaction, understandably, amused a whole bunch of fans, while also leaving them curious as to what was going on in Kohli’s mind when he made that statement to the stump mic. In fact, that was exactly one of the questions directed at Kohli during the post match presentation of the Cape Town test.

Kohli, however, chose to stay silent on the matter, alleging that people on the outside wouldn’t understand why he and his teammates exactly what was going on the field at that time. He further added that had India managed to take a few wickets after that incident, people would’ve immediately moved on from that single incident. Just like India players did.

“No comments to make; don’t want to drag the matter and create controversy”- Virat Kohli

“I have no comment to make on either. We understood what happened on the field, and people on the outside don’t know exact details of what goes on on the field. For me to try and justify what we did and say we got carried away if we had gotten 3 wickets there, that would probably have been the moment that changed the game. The reality of the situation is we didn’t apply enough pressure on them for longer periods of time throughout the course of the Test match, and hence we lost the game.

“That one moment seems very nice and exciting to make a controversy out of, which obviously I am not interested in. It was just a moment that passed, we moved on from it and kept trying to pick wickets,” explained Kohli.

While Kohli’s silence effectively put an end to the ‘cheating’ saga from the players’ perspective, there have been some key developments in the aftermath of the incident. SuperSport issued an official statement claiming that HawkEye is managed by an independent service provider and is approved by the ICC. This essentially exonerates SuperSport from the accusations that they had conspired to tilt the scales in South Africa’s favor.

India players, meanwhile, were spoken to by match referee Andy Pycroft after the match, and were cautioned that making such unfounded public claims in the future could have them sanctioned by the ICC. No fines have been imposed on any player.