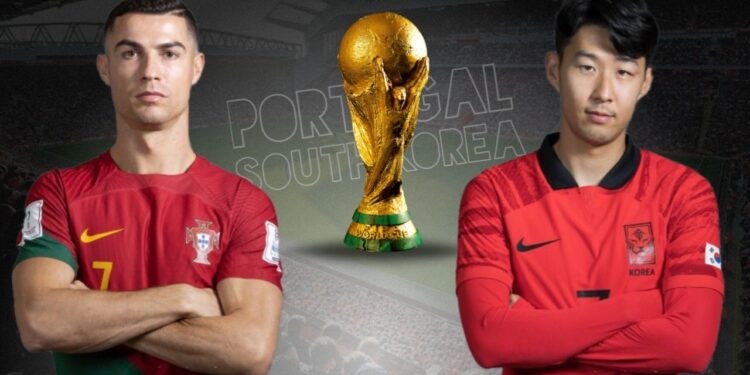 The Group H of the FIFA World Cup 2022 is to be concluded today. Portugal has already qualified for the last 16 and they will be eying their 3rd consecutive win in the match against South Korea. We all know how much Indian fans love and support Cristiano Ronaldo and they are eagerly waiting for the contest. The live telecast of Portugal vs South Korea game will be available to watch on the TV channel in India while streaming can be watched on the OTT app. In this space, you will find broadcasting details of the FIFA World Cup 2022.

Two Group H matches to be played today; Portugal vs South Korea and Ghana vs Uruguay. If Portugal even loses today, they will still have a high chance of ending at the Top position. While South Korea who only have 1 point in their bag needs to beat Portugal and will hope that Uruguay beat Ghana by 1 goal. On the other hand, Uruguay who are currently in 4th position with 1 point wants Portugal to win and they also have to beat Ghana to make it to the pre-quarter-finals. Talking about Ghana, they are in a firm position and only need to beat Luis Suarez and Co.

Indian fans who want to watch Portugal vs South Korea match on TV can tune in to Sports 18 SD channel. While Sports 18 HD channel will broadcast Uruguay vs Ghana match. Viewers in India can watch the live telecast of the Portugal vs South Korea FIFA World Cup game in Hindi commentary on MTV HD channel. Football World Cup matches today won’t be available on Sports 18 Khel which is a free-to-air channel on DD Free Dish.

Jio Cinema app is streaming the FIFA World Cup in India and that too without any subscription charges. This app can be accessed by any telecom operator user. So fans can stream Portugal vs South Korea game on the mentioned app. Besides Jio Cinema, fans can also watch the game online on Jio TV but this app is only available for Jio sim users. Tata Sky users who have activated Sports 18 of MTV HD channel on their set-of-box can access them on their mobile or tablet by downloading the Tata Play app from Google Play Store or Apple’s App Store. Vi (Vodafone Idea) sim users will able to watch FIFA World Cup 2022 on Vi Movies and TV app.