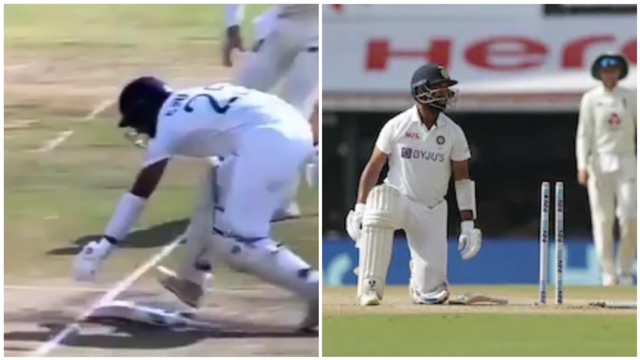 Indian senior batsman Cheteshwar Pujara run out in today match was a strange moment. It all happened in the very first over of the Day 3 of ongoing Ind vs Eng 2021 second test at MA Chidambaram Stadium in Chennai.

On the turning track of Chennai, Kohli and Pujara continue the second innings for India on the Day 3. Meanwhile, the pitch was really fortunate for the spinners as English spinners too getting help from the wicket.

Indian batsman Cheteshwar Pujara, who was defending balls from Moeen Ali, in the last ball of the over he decided to step out to hit the ball but the ball didn’t get connected nicely and went towards the short-leg fielder Ollie Pope. Pujara was aware to get inside the crease and he almost gets back but unfortunately, bats slipped from batsman’s hand and he dismissed, as wicketkeeper Ben Foakes shows his presence of mind.

The video of Pujara run out in today match is getting viral over the internet platforms. Here Sportstime247 is also attaching the video of the bizarre wicket.

So Far Summary of the Match (Ind vs Eng 2nd Test)

Earlier in the match, Indian skipper Virat Kohli after winning the toss decided to bat first at MA Chidambaram Stadium in Chennai. Meanwhile, in the first inning, India put a good total of 329 on the board, thanks to Rohit Sharma’s 161 runs.

Also Read: This team could pick Glenn Maxwell according to Gautam Gambhir

Thereafter, in the reply, the England team bundled out for a score of 134 on the turning pitch of Chennai. From India, R Ashwin took five wickets and helped team India to get lead of 195 runs in the first innings.

At the end of the 50 overs in the second innings of India, Team India managed to score 159-6. And even now, Indian skipper Virat Kohli along with R Ashwin is kept increasing the lead and helping the team to set a good target on this turning track.