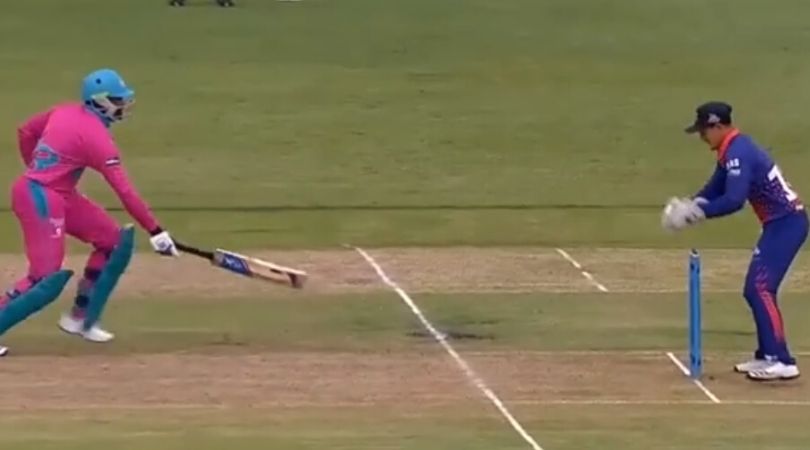 Quinton de Kock is currently one of the busiest cricketers of the world. Besides being a key player of the South African team, he actively plays T20 leagues around the world. He is the wicket-keeper of one of the best T20 sides ever Mumbai Indians. Recently, defending champions of IPL have retained de Kock for the 2020 season.

Currently, Quinton de Kock is playing South Africa’s Mzansi Super League as a captain of Capetown Blitz. So far, he has impressed with his captaincy as Capetown are standing at the top of the league table of this 6-team tournament. Capetown Blitz has won 3 out of first 4 matches however the team will play 6 more matches in the league stage.

Today, during the match against Durban Heat, Quinton de Kock imitated veteran wicket-keeper MS Dhoni to run out the Andile Phelukwayo. He tricked the batsman with his actions behind the stumps. It all happened during 18th over when Phehlukwayo hit a Sisanda Migala delivery towards Marques Ackerman at long-off.

It was a difficult chance of catching but fielder Ackerman couldn’t hold on the ball. He was quick enough to throw the ball to the keeper. Phelukwayo didn’t realise the throw was coming to his end due to de Kock’s cleverness as he was standing like the ball was on the other end. 26-year old was quick to collect the ball and ran Durban batsman out immediately. At this moment Phelukwayo realised that he was tricked by de Kock. In 2017, MS Dhoni had run-out Glenn Maxwell in the same way.

De Kock Does a Dhoni !

After Phelukwayo’s wicket, Durban needed 27 runs off 2 overs. But the team could score only 16 runs off the next two overs and Capetown Blitz clinched the 10-run victory. Capetown’s Dale Steyn was named man of the match for getting 2 wickets in 4 overs.