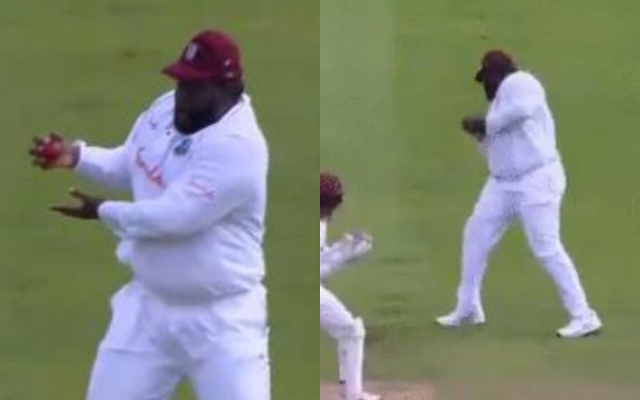 Rahkeem Cornwall, the latest addition to the West Indies team has got a lot of people talking. He has been the center of attraction, ever since he made an appearance in the third RedforRuth Test match played between England and West Indies at Old Trafford Cricket Ground.

There are various reasons as to why people are talking about the Windies all-rounder, his weight being the primary one. Many had speculated that his weight will be a big hindrance for him to become a cricketer, however, he proved everyone wrong.

West Indies’ move of going in with two spinners in the match was a bit questionable and Cornwall not getting any wicket on the first day didn’t help the cause either. However, Cornwall seemed to make up for his bowling through his brilliant fielding in the slip.

Cornwall pulled off a stunner

It was the 48th over of the innings with Roston Chase bowling to the in-form Rory Burns. The batsman tried to cut the bowl, but taking the edge the ball swiftly went to Cornwall at first slip, who took a one-handed blinder to dismiss the batsman. The ball was going at a great speed when the all-rounder threw his right hand to complete the catch. Showing great reflexes, the Windies all-rounder proved that big bulky cricketers can also be good fielders.

The legend of Rahkeem Cornwall is growing by the minute – quite a catch by the big fella – #rahkeemcornwall #windiescricket #ENGvWI pic.twitter.com/q6DBUROlHM

Consequently, Rory Burns was dismissed after a well-made 57 runs. While Cornwall displayed great reflexes, Stuard Broad brought his batting prowess to the fore to help England get a competitive score. Broad scored a quickfire 62 helping England get to 369. Broad’s all-round performance put England on top after the hosts took 6 crucial Windies wickets.

West Indies is reeling at 137/6 after the end of the second day’s play. They need a complete turnaround to give a tough competition to the England team. At the moment, things are going England’s way.