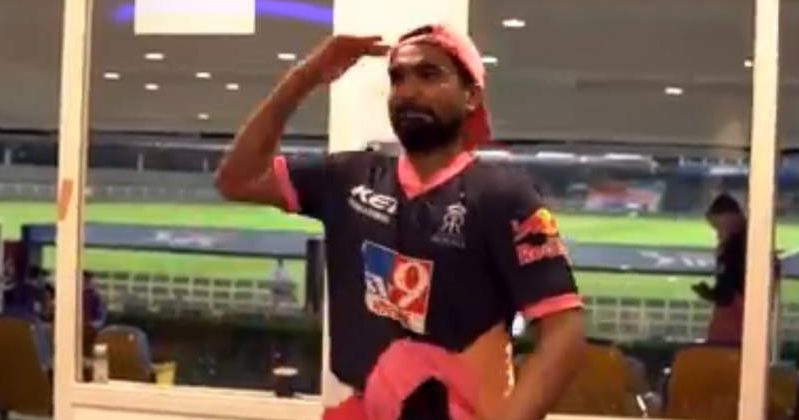 Unsung hero Rahul Tewatia became a household name overnight after his match-winning batting display against the Kings XI Punjab in the ongoing Indian Premier League (IPL). A soft-spoken Tewatia was all praise for his self-belief and performance that ranks among one of the top moments in the IPL. However, a viral video of Rahul Tewatia mocking the celebratory ‘army salute’ of Kings XI Punjab bowler Sheldon Cottrell has been making the news.

Did Rahul Tewatia Take a Dig at Cottrell?
Ever since he’s been around the international cricket circuit, West Indian Sheldon Cottrell has been famous for his army salute celebration which he has trademarked after taking a dismissal. The army salute becoming synonym to Cottrell’s celebration.

Cottrell didn’t quite have a good outing against the Rajasthan Royals and it got worse within a span of an over in which he was taken for 30 runs by Tewatia (courtesy 5 sixes). In a post-match video been circulated from the Royals dressing room, Tewatia can be seen celebrating his feat with teammates, and interestingly what caught everyone’s attention was him mocking Cottrell’s celebration.

Straight from the dressing room, into your hearts. 💗

Tewatia Clears The Air Before Controversy Looms
Rahul Tewatia was quick to clarify the accusations over the video and clear any controversy that could arise thereafter. Tewatia claims as seen in the video, there is no reason whatsoever to mock Cottrell and make fun of him. He has all the respect for the bowler and the background he comes from. Tewatia had retweet – “For those who noticed, I love Cottrell’s celebration and have huge respect for his army background, it was just my lucky day. Don’t think I can do it as well as him though thanks guys for all the love.”

For those who noticed, I love Cottrell's celebration and have huge respect for his army background, it was just my lucky day. Don't think I can do it as well as him though 😅 thanks guys for all the love.

Royals Suffer First Defeat
Rajasthan Royals suffered their first defeat at the ongoing Indian Premier League when they lost to the Kolkata Knight Riders (KKR) by 37 runs. Rocked by early wickets in the run chase, the Royals batting never gathered steam, with only Tom Curran an unlikely contributor with 54 runs.