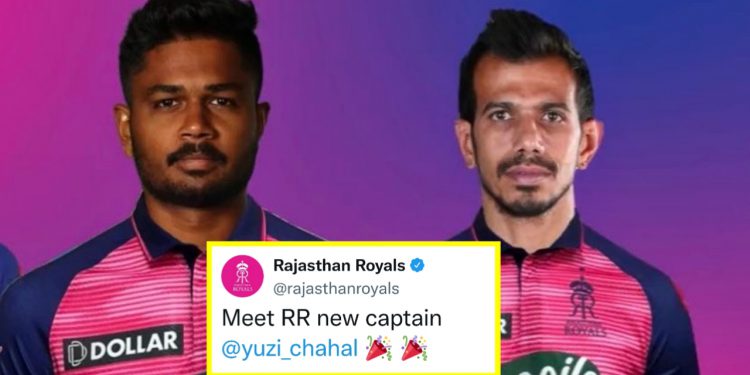 The Rajasthan Royals’ (RR) Twitter account was apparently hacked by Yuzvendra Chahal today after the leggie received the password from the franchise’s CEO Jake Lush McCrum.

It all started after Rajasthan Royals posted a video of Chahal, in which he was seen ordering food. Chahal did not take the video very well and vowed to “hack” the account.

From thereon a series of funny tweets were posted by Yuzvendra Chahal from RR’s Twitter handle, one of which was the announcement of the new skipper. The 31-year-old wittily announced himself as the new skipper of the team and received a reply as well from the real captain of the franchise, Sanju Samson.

In another tweet, Rajasthan Royals’ account, which was then getting handled by Chahal, posted a picture of the spinner with the caption “10000 Retweets and He will open with @josbuttler uncle.”

Chahal took full advantage of the account and did a few more tweets apart from these.

Finally, the veteran decided to log out from the account and give its ownership to the correct hands. “Iss baar Bach Gaye admin logging out now #pangamatlena #hallabol,” he wrote.

For the unversed, Chahal was bought by Rajasthan Royals for Rs. 6.5 crore in the Indian Premier League (IPL) 2022 mega auction. He will be joining RR after a successful stint with his former franchise Royal Challengers Bangalore that lasted about eight years.

In his IPL career, Chahal has claimed 139 scalps in 114 matches at an economy of 7.59. His performance in the upcoming IPL season would prove to be very vital for RR and will affect their chances of adding the second title to their cabinet.