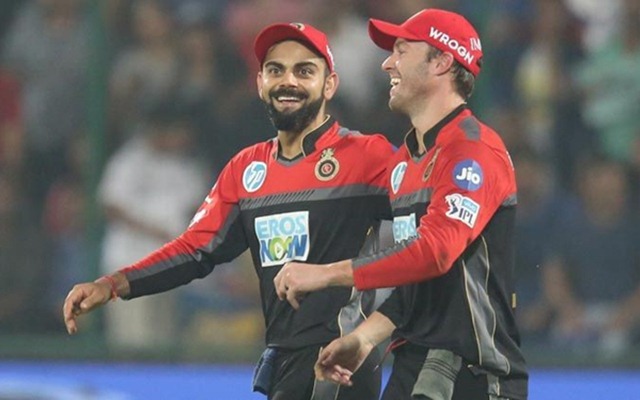 Fans got to witness a rather peculiar exchange between Royal Challengers Bangalore players Virat Kohli and AB de Villiers. On Monday, the former South Africa captain took to his Twitter account to ask the Indian captain about a bunch of really random stuff.

@imVkohli what are you to?

@imVkohli what are you to?

It started with de Villiers asking tagging Kohli in a post, asking him what he was doing.  The premise itself seemed somewhat bizarre; after all, Twitter supports a private chat option to engage in such seemingly-privy banter! Nonetheless, Kohli replied; almost immediately; posting a sofa and a TV emoticon. Possibly suggesting he was watching Television.

De Villiers took little time to come up with a reply, posting an ignited-cracker as a response. Weird, right? Yes, kind of similar to the reaction Kohli made, posting “???”. De Villiers, keeping up with the reputation of being the finisher; naturally; finally ended the conversation with this video.

What’s supposed to be the meaning of all this? Well, clearly the bold message at the end suggests something about Kohli getting off the couch. More interestingly, the couch in the video flashed Wrogn’s name, a merchandise marketed by Kohli himself. Wrogn even sponsored the RCB team’s chest logo during the last IPL season. Incidentally, the RCB uniforms for this season were already revealed a few weeks back, which actually feature Muthoot Fincorp as this year’s chest sponsors. Some connection with that, maybe? Well, the video does end with tomorrow’s date, so it shouldn’t be long before we find out more.

Kohli and De Villiers don’t have to wait much longer before they can reconnect on field and have private discussions. The dynamic duo will reunite in exactly 3-weeks time to feature in RCB’s opening match of the season against the Kolkata Knight Riders, at the M Chinnaswamy Stadium in Bengaluru. In the meantime, Kohli would be eager to rediscover his batting form in the 3-ODI series against South Africa, starting from 12 March.