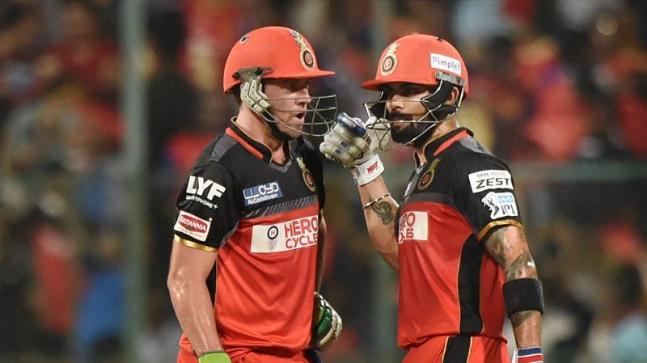 South Africa batsman AB de Villiers, fondly known as ‘Mr. 360’, has quite a fan-following here in India. Much of the former South Africa captain’s likeable reputation can be attributed to his strong performances in the Indian Premier League. After featuring for the Delhi Daredevils for the first three seasons; the Royal Challengers Bangalore snapped him up in the 2011 mega-auctions. Ever since then, de Villiers has been a vital cog in the RCB team’s scheme of things.

In a recent interview with Zimbabwean commentator ‘Pommie’ Mbangwa, de Villiers expressed his gratitude towards the RCB management for all the support. Answering a fan’s question, AB admitted about his admiration for Chennai Super Kings’ and former India captain MS Dhoni. On being asked if he ever planned of switching sides, he replied that the IPL auctioning system doesn’t provide him that option.

‘Because of the auction system in the IPL, I’ve never had a choice. I played with Delhi Daredevils for the first 3-seasons, and then they released me. Bangalore picked me up immediately after that. So I didn’t really have any control, at least as far as the team-selection questions go,” de Villiers told Mbangwa over on their Instagram live-chat.

‘Special bond with the RCB; would love to play here for the rest of my life’- de Villiers

Later, he revealed that he had formed a special bond with Virat Kohli and his team; and he wouldn’t want to part away with that even if that enables him to play for the CSK..

“Obviously, playing for Bangalore for so many years; I think this is going to be my tenth year with them. But even way back in 2015, going into my fifth year, I realised I would love to play here for the rest of my life. I really enjoy the franchise, the vibe, the people. You create friendships you don’t want to leave. Then I started feeling that I actually want to play for RCB.

“Unfortunately, I don’t think the CSK thing is going to happen. It’s good to play against them, though; we really enjoy the competition,” he concluded.

The RCB management, for one thing, would sure want de Villiers to continue on his job as one of the team’s batting mainstays. In his nine-long career, Mr. 360 has compiled 4395 runs for the RCB, averaging  39.95. Although he hasn’t directly been involved in the team’s captaincy role, his vast experience establishes him as an invaluable asset in the RCB think-tank.