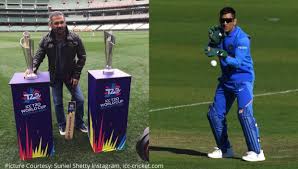 Social media activity has been on an up ever since the COVID-19 lockdown. Celebrities across every wake of entertainment are utilizing this time to add to their fan following; some coming up with really fun ways. Australia opener David Warner, for example, recently uploaded a video of him and his daughters grooving to some famous Bollywood songs.

Actor Suneil Shetty seems to be one of the stars keeping up with this ‘Bollywood-Cricket’ crossover trend. Popular Hindi cricket commentator Aakash Chopra recently posted a video on his Youtube channel featuring himself and the 58-year old Bollywood actor discussing the Indian team’s possible combination for the upcoming World T20.

Aakash uploaded an old video of him chatting with ‘Anna’ about the Indian team’s composition. Although a few months old at this point, some of the comments that Suneil made well showcased his fondness as that of a devout team India fan. He picked Rohit Sharma and KL Rahul to open for his team; with Virat occupying the pivotal number-3 spot. According to him, each of the players in the top-3 should feature in the side ‘”150%”, and there’s no question of dropping them.

The team’s middle order, though, is where Suneil comes up with some rather interesting picks. Delhi Capitals captain Shreyas Iyer fills in the number-4 spot; while for the team’s wicketkeeping option, Suneil opts for the pedigree of former captain Mahendra Singh Dhoni. Elaborating on his pick, Suneil admits that the decision to pick Dhoni over Rishabh Pant seemed a rather tough one. But he did have a fitting explanation for the same.

“Pant needs to work on his fitness”- Suneil Shetty

“As far as Pant goes, supremely talented player but I think Pant needs to lose 4-5 kilos of weight,” he opines. “It’s a positive thing that I mean to say. It’s not like I’m the god of cricket or the understanding of cricket. But, as far as wellness and fitness goes one could see the difference in movement,” he concluded.

Rounding up his squad’s lower-middle order are all-rounders Hardik Pandya, Vijay Shankar, and Ravindra Jadeja. For Jadeja specifically, the actor came up with a witty reference to commentator Sanjay Manjrekar’s controversial “bits and pieces-player” comment from last year’s World Cup.

“No, I don’t think he (Jadeja) is a ‘bits-n-pieces’ player because I count the enthusiasm of a player as well. It helps to gain confidence. Like Virat, his aggression and passion has changed the mindset of youngsters,” he explained.

Suneil completed his 14-man side by choosing fast-bowler Mohammad Shami as the ‘leader of the pack’. “I think he (Shami) is brilliant, especially when he pitches the ball up. I haven’t seen a cleaner run in a follow-through also than Mohammed Shami. He is a dream bowler,” he concluded.

Here’s his complete team India squad for the World Cup: