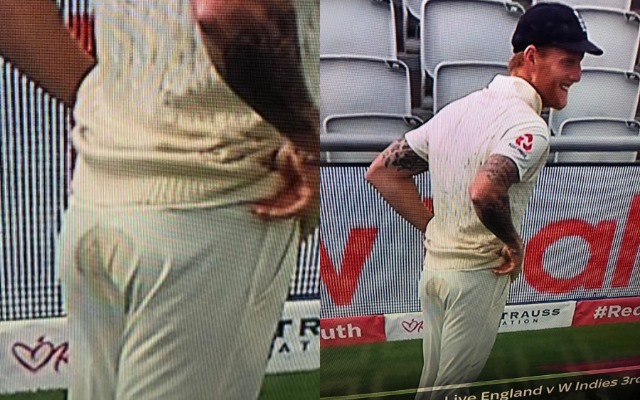 Team England’s test team vice-captain Ben Stokes has had quite a few sensational cricket packed weeks behind him. After a valiant albeit lost-caused all-round show in his maiden test as captain in Southampton, Stokesy went one better in Manchester and starred with a MoTM winning performance. His spontaneous, out-of-the-blue tendency to pull stellar on-field heroics makes him a hot player for the cameras.

It was during one of these picture-perfect camera moments during yesterday’s play when the broadcasters found something rather amusing on Stokes’ trousers. At some point during the live-telecast, the cameras zoomed in on a suspicious-looking brown stain on Stokes’ pants. England skipper Joe Root could hardly contain his laughter; while Stokes himself first tried to hide the spot by pulling his sweater low. But once those attempts failed, he resigned and shared a spirited chuckle with his comrades.

Fans speculate on the stain on Stokes’ trousers

If only it were over that easily. Moments after the broadcast, fans broke the internet with images of Stokes’ smudged-posterior.  This begged the question if the all-rounder had experienced some bowel-mishap. Some even likened his plight to that of Gary Lineker, an English footballer who experienced something similar during a live match in the 1990 World Cup. Post that embarrassing incident, Gary had explained, “I had a bit of a Dickie stomach, I don’t know where it came from. I managed to get through the first half despite terrible stomach cramps. It’s a World Cup, you know. You cannot say ‘Excuse me, ref, is it alright if I pop off for five minutes?”

Stokes, to his credit, though, later clarified that the spot had something to do with sitting on ‘split coffee’, ending the notorious speculations.

Even if the stain had been what fans thought it had been, it wouldn’t have been something new; at least not on the Old Trafford cricket ground. Recently, Australian test captain Tim Paine shared a tummy-trouble story of his own from last year’s Ashes. Paine revealed that during the fourth test-match at Manchester, his stomach got a bit too excited from the prospects of retaining the coveted Ashes urn; and just right before his bowlers claimed the final English wicket, his stomach let him down. Stokes, interestingly, also happened to be on the ground during that match. “Because I was a bit unwell, it was a bit runny. You could hear it hit the ground,” Paine sheepishly conceded.