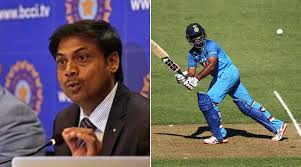 Throughout his tenure, the Indian men’s cricket team’s outgoing chief-selector MSK Prasad has been at the helm of some significant decisions. Under Prasad’s selection-policies, the Indian team invested a good amount of time in developing the up-and-coming youngsters. The likes of Rishabh Pant, KL Rahul and Mayank Agarwal; among many others; all got ample opportunities. That said, under his reign, the Indian team could not collect any titles in any of the ICC tournaments. A general analysis, however, would suggest that in Prasad’s tenure, team India consistently performed as genuine world-beaters. In fact, more often than not, the team actually enjoyed its spot on the better-end of the ICC rankings, particularly in tests and ODIs.

The former Andhra wicket-keeper took the national selector’s office back in September 2016. His stint as the chairman of the five-member selection-committee ends this year, a year earlier than his original contract. Under Sourav Ganguly’s new leadership, the BCCI has restructured its contracts to the originally-prescribed period of four-years. As he finishes packing his stuff from his office, Prasad has been quite insightful about some of his big decisions. Recently, in an interview with Sportstar, the 44-year old even opened about one of the most controversial decisions of his career.

The curious case of Ambati Rayudu

Back in April last year, Prasad and his committee announced the Indian team for the 2019 World Cup in England. Most of the selections happened on the expected lines, but fans couldn’t help but ponder about the omission of Ambati Rayudu from the team. Up until the series preceding the World Cup, Rayudu had established himself as a sure-shot selection for the mega-event. However, at the eleventh hour, the selectors opted for the ‘Three-Dimensional player’ Vijay Shankar, who walked in to the side as an all-rounder. This exclusion didn’t bode well with many fans; Rayudu himself took a sarcastic-jibe on the situation with his cryptic ‘3-D glasses’ tweet. There was some consolation in the fact that he toured England as one of the reserve players for the squad. However, later in the tournament, when the team lost Shikhar Dhawan and Shankar to injuries, Rayudu couldn’t feature into the side.

The selectors opted for Mayank Agarwal and Rishabh Pant as replacements, players with much lesser experience. It even came to a point when a frustrated Rayudu temporarily announced his retire from the game. Amidst all of the ensuing commotion, Prasad and his team copped a lot of flack. Some fans directly accused him of acting in a wrong and impulsive manner to Rayudu’s tweet. Now, almost a year since all those noises have subsided, Prasad reveals he ‘seriously feels for Rayudu’.

Prasad opens up on Rayudu

The former-selector opined that Rayudu’s omission was a touch and go issue, so there wasn’t really a lot that could happen. “I felt seriously for Rayudu. I can clearly say that. It was very touch and go issue” Prasad explained. He further commented that Rayudu had been selected on the back of stellar IPL performances; something that not many people could agree upon. “If you remember, we picked him for ODIs based on his good IPL season, which may not look appropriate to many,” he added.

Prasad also laments that Rayudu had given up his test-playing ambitions early, as he believed Rayudu was in the radar. “Our committee always felt that he should be on the radar of Test selection after the 2016 Zimbabwe tour. I even spoke to him as to why he was not focusing on Test cricket”. He concludes by mentioning that the selectors had reached out to him to also help him with his fitness issues. “Then, we focused on his fitness for one month at the NCA, helped him there. He has delivered to an extent. Unfortunately, I am also hurt at what happened to him, having played with him. I feel bad for him,” he concluded.