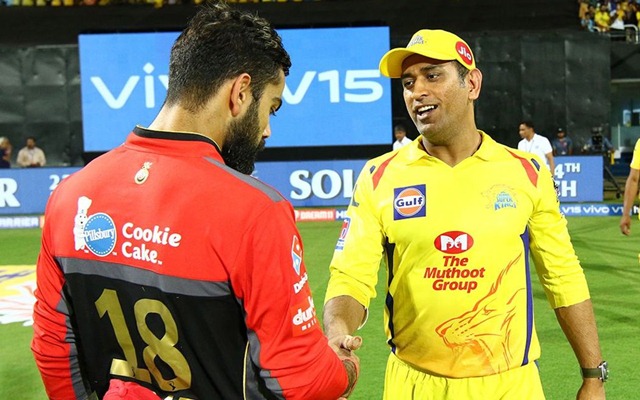 IPL franchise Royal Challengers Bangalore is, arguably, the most ‘memed’ team in the tournament. There’s a central theme around their performances all through the years. The team management compiles a star-studded lineup in the auctions; but when it comes to on-field execution, the unit falters. Rather miserably, at that too.

For the past few years, the team’s fan-army has been promoting an unofficial anthem to cheer on their team: ‘Ee Saala Cup Naamde’, literally translating to “This year, the cup is ours” in Kannada. Sadly, the RCB players’ on-field display doesn’t really fit in well with the victory-inspiring vibes of the motto. Consequently, this fan-favorite tagline has become somewhat of a meme for people to poke fun at RCB fans.

Turns out, ‘Ee Saala Cup Naamde’ has escalated to an inter-franchise joke-like status. Recently, Chennai Super Kings came up with a hilarious post to troll their cross-Kaveri river rivals.

Over on the Royal Challengers’ official Twitter page, the team has just concluded an unofficial fan-poll titled the ‘Indian Poll League’. In a likely attempt to entertain their fans amidst the COVID-19 lockdown; the RCB Twitter page organized this survey similar to the IPL’s format. This non-canon ‘tournament’ spanned well over 55-days, and also featured legitimate Playoff and Eliminator matches. Talk about commitment.

Quite unsurprisingly, RCB made it into the finals. As for the surprising part- they won! They faced-off against the Sunrisers Hyderabad in the finale, and managed to win the event by a margin of near-about 85% votes. The management later even released a post on their Twitter handle to congratulate and thank their fans for their unwavering support.

A big thank you to everyone who made RCB the champions of the #IndianPollLeague by voting consistently, every day for the last 55 days. In the final, #RCB beat #SRH with an incredible 8️⃣5️⃣% of the votes! 🏆 #PlayBold #InAParallelUniverse #ipl #Bestfans pic.twitter.com/1WBbU4WCU1

Unbeknownst to them, however, the CSK Twitter account had discovered a fun-opening to flip the joke back on the #playboldarmy. They replied by posting a picture, featuring the caption ‘Ee Saala Cup Umadey’ (Translation: This year, the Cup is Yours).