Three-time IPL champions Chennai Super Kings have a reputation as one of the more close-knit teams. CSK is, in fact, the only team in the league’s history, to have a permanent first-choice captain across all the seasons. The franchise has quite an empirical-record when it comes to bonding strongly with its members- be it their marquee players like MS Dhoni, Suresh Raina and Ravindra Jadeja; or even some of their ‘Behind the Scenes’ staff. Take their coach Stephen Fleming, for instance, who has been a part of the CSK family since 2009.

On Wednesday morning, though, the CSK management detoured from that stance as they announced the suspension of their team Doctor, Madhu Thottappillil over on Twitter. Dr. Thottappillil’s axing, according to the CSK Twitter-account; comes as a consequence of an insensitive tweet the former made on his Twitter account yesterday.

On Tuesday, the ex-CSK team doctor took to his Twitter and made a distasteful tweet about the soldiers who had lost their lives in the recent border-violence incident in Ladakh’s Galwan Valley region. The past couple of days have been tense for the Indian Army; as they clashed with the Chinese Army over at the Line of Actual Control (LAC) in Eastern Ladakh. The resulting violence has led to as many as 20 casualties on the Indian-side and around 40 on the Chinese; statistically, the most deaths in India and China’s five-decade-long tense military history.

Indians all across the globe honored the departed soldiers by paying tributes to their valiant sacrifices. Dr. Thottappillil, meanwhile, found a window of opportunity in this tragic piece of news to vent his political agendas. Here’s a tweet from Mohammad Aziz featuring a screen-shot of Dr. Thottappillil’s now-deleted tweet. 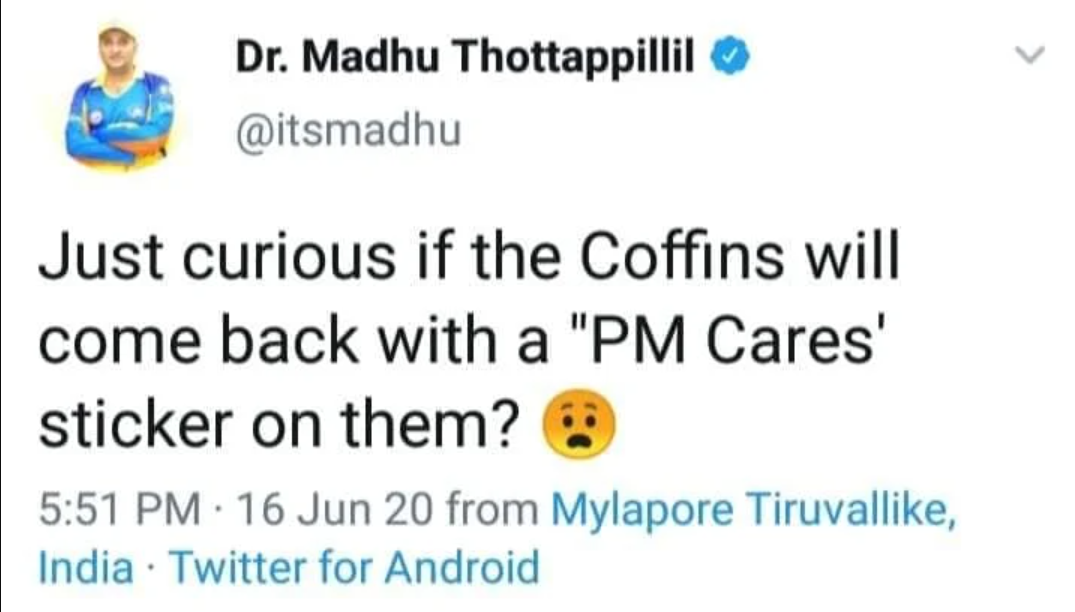 Needless to say, the CSK management didn’t condone his behavior. Over on their Twitter announcement, they clarified that they weren’t aware of the team doctor’s tweet until it was brought to their attention. They concluded with the announcement of his effective immediate suspension from the side.

The Chennai Super Kings Management was not aware of the personal tweet of Dr. Madhu Thottappillil. He has been suspended from his position as the Team Doctor.

Chennai Super Kings regrets his tweet which was without the knowledge of the Management and in bad taste.