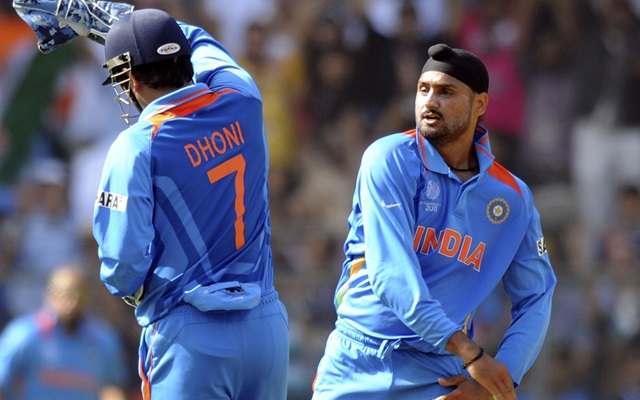 Just when you thought speculations surrounding MS Dhoni’s playing career would come to an end, we’ve got another one. This one, though, should sit down much better with Sakshi Dhoni than the retirement rumors that aired earlier last week.

Veteran India off-spinner Harbhajan Singh recently opened up to his former Mumbai Indians’ teammate Rohit Sharma on MSD’s future. ‘Bhajji Paaji’ and Mahi share a strong camaraderie which dates way back to their inaugural 2007 WT20 victory. They’ve come even closer in the past couple of years ever since the CSK added the seasoned Punjab all-rounder to their roster.

So it’s fair to assume that Bhajji, of all people, would have the most-reliable insights to offer about his former captain. And so he does. Over on a recent interaction with Rohit, Bhajji opined that Dhoni had already featured in his last international match; even before his fans could realize it.

“I was at the Chennai (Super Kings) camp, and a lot of people asked me, “Is Dhoni going to play? Will they select him at the [T20] World Cup?” I said, “I don’t know, it’s up to him”. Whether he wants to play or not, it’s his decision,” Harbhajan clarified.

“He’ll play IPL, but he knew that the World Cup match would be his final for India”- Harbhajan on Dhoni’s future.

“100 percent, he’ll play the IPL, but does he want to play for India anymore? That’s what we need to find out. Does he feel like it or not? As far as I know, he doesn’t want to. Usne khel liya hain India ke liye (he’s done playing for India), and as far as I know him, I don’t think he would want to wear the blue jersey again.

“When it comes to playing for India, I think he had decided that whichever was India’s last World Cup match was – final, semi-final – would be his last match too. That’s what I feel. A couple of people had told me, too, that this is how it will be,” Bhajji concluded.

Rohit meanwhile openly admitted that neither he nor any of his teammates know what’s going on in Dhoni’s mind. According to him, when he is outside of the team, ‘Mahi bhai’ almost goes underground, which makes the situation really difficult to comment on. “We have not got any news. World Cup’s last match was in July, since then until now we have not heard any news. (We) have no idea (about Dhoni),” he said.