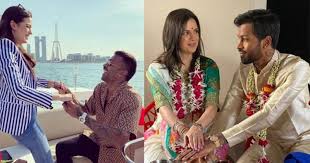 Earlier this January, mercurial Indian all-rounder Hardik Pandya got engaged to Serbia-based actress Natasha Stankovic. At the time, the news had come as a rather unexpected development, since no one had really known about the two of them dating.

Well, turns out there’s a quite an interesting backstory behind their affair. The younger Pandya brother recently made some interesting revelations about his wife over on a chat-show with renowned cricket enthusiast Harsha Bhogle.

Over on ‘In conversation with Cricbuzz’, the 26-year old divulged that he hadn’t even told his parents of his engagement plans until much later. Considering the ‘family is my everything’ claims he has been airing lately, this is rather surprising. His elder brother and Mumbai Indians teammate, Krunal Pandya, however, was in on the plans.

“I didn’t tell my parents about the engagement. Well, I did tell them, but only after I had informed Krunal. You see,  two days before (the engagement), I told Krunal. I said, ‘I have had enough. I have found someone in my life who I love, and I am becoming better.’ When I did tell my family later, they (parents) backed me and told ‘do whatever you want’. So we were really happy,” Pandya Jr. shared with Bhogle.

At some point in their conversation, Harsha inquired if they recognized one another before they had met. Hardik responded with yet another bombshell.

“She had no idea who I was. I got her by talking,” Hardik admits. “I was wearing a hat, a chain, a watch, at 1 AM- a really bizarre look. So she thought that ‘yeh toh alag prakaar ka aadmi aaya hai’ (different kind of person came). That’s how we started talking. We hit off real quick; a few weeks later we had started to date. Then later, of course, we got engaged on December 31. So yeah, that’s our story,” he concluded.

A few days back, the couple announced that they had, in fact, tied the knot in the ongoing lockdown, and are even expecting their first child in a few months. Hardik himself has been quite active on his accounts lately, where he has been very appreciative of his family and friends’ support. In a recent post, he even called his brother Krunal his ‘Guru’.