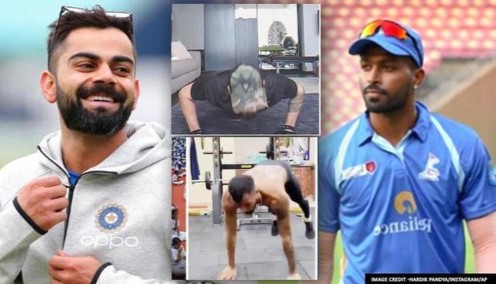 This lockdown period has given everyone ample time to indulge in different activities of their choice. While some are taking creative challenges, others are keeping up with their fitness. Indian cricketers Virat Kohli and Hardik Pandya are no far behind as they are making sure they keep their fitness intact.

Recently the cricketers involved themselves in an inspiring battle of push-ups. Hardik Pandya stole all the limelight when he came up with a video performing superman push-ups. The fans were mighty impressed with his fitness. The sight of it was so impressive that even captain Kohli couldn’t resist the “fly push-ups”. He made a video performing the push-ups but with a little twist, adding a clap to it.

Hardik Pandya as gritty as he is, came up with yet another version on Saturday. It took Pandya 2 days to respond but it was worth all the wait. The allrounder took his push-ups game a notch higher by adding back-claps to it.

Hey bruh @virat.kohli Always got your back 😉 @rahulkl @krunalpandya_official guys would you like to have a go ✅🔑 and special thanks to my darling @coach_a.i.harrsha for pushing me ✅

Virat Kohli responded to the video and looked quite impressed with the dashing all-rounder’s push-ups. He expressed his feelings as he wrote: “Haha top work H.”

While fans are still in two minds about the winner, Pandya’s fiancée Natasa Stankovic announced it already. She commented on Pandya’s video calling him the best, writing: “My bebu the best”. 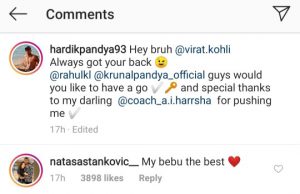 Ever since the lockdown started, Virat Kohli has been pretty active on social media posting different videos of his activities during the day. The fans have been quite amused with the cricketer’s antics. It will be really exciting to see both these cricketers back on the field after everything gets normal.