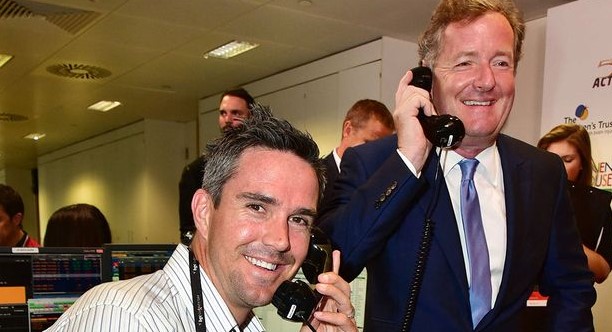 Former England batsman Kevin Pietersen has had quite an experience with his Twitter account over this weekend. On Saturday, the erstwhile English skipper made a tweet from his account, which, according to Twitter, violated their set guidelines against ‘harassment and abuse’. Consequently, the social media platform took the matter into their own hands and temporarily locked Pietersen’s Twitter account.

Pietersen’s ‘controversial’ tweet in question was one he directed at his fellow English television presenter Piers Morgan.  Yesterday, Morgan and Pietersen partook in a light-hearted Twitter banter over the English government’s health policies towards their country’s COVID-19 situation. Morgan labeled the English government’s decision to reopen pubs on weekends ‘dumb’ and called out the British government for their ignorance. KP countered by pointing out that the average death-age and alcoholism-issues don’t have that much in common.  At some point in their conversation, Kevin joked that he would ‘slap’ Morgan whenever they’d next meet.

We say ‘joked’, because that is how both Pietersen and Morgan reacted to the situation. But it seems that the mods at Twitter couldn’t grasp KP’s joke and found the tweet potentially dangerous and hence, decided to take some action. Shortly after, Twitter locked Pietersen’s account; reasoning that his post could, potentially, incite an unwanted situation of ‘physical harm’.

Both Morgan and Pietersen took digs at Twitter for its overtly scrutinous approach. Piers clarified that Kevin had no ill-intentions when he made his ‘slap’ tweet. He even elaborated as to why KP couldn’t really ‘slap his way out of a paper bag’, and urged Twitter to reinstate the account. Further, he added a screenshot of Kevin’s account-restriction message to make his point.

BREAKING: Kevin Pietersen suspended from Twitter for threatening to slap me… 🤣
Amusing though this is, it was an obvious joke and a) I don’t feel remotely harassed b) he can’t slap his way out of a paper bag. So, please reinstate him ⁦@TwitterUK⁩ – this is ridiculous. 👇 pic.twitter.com/kbkCKuDWdm

Pietersen, meanwhile, took to his Instagram handle to inform fans about the situation. Thankfully, Twitter didn’t take long to rectify the situation, and KP had his account restored by the same evening. He even announced his comeback.