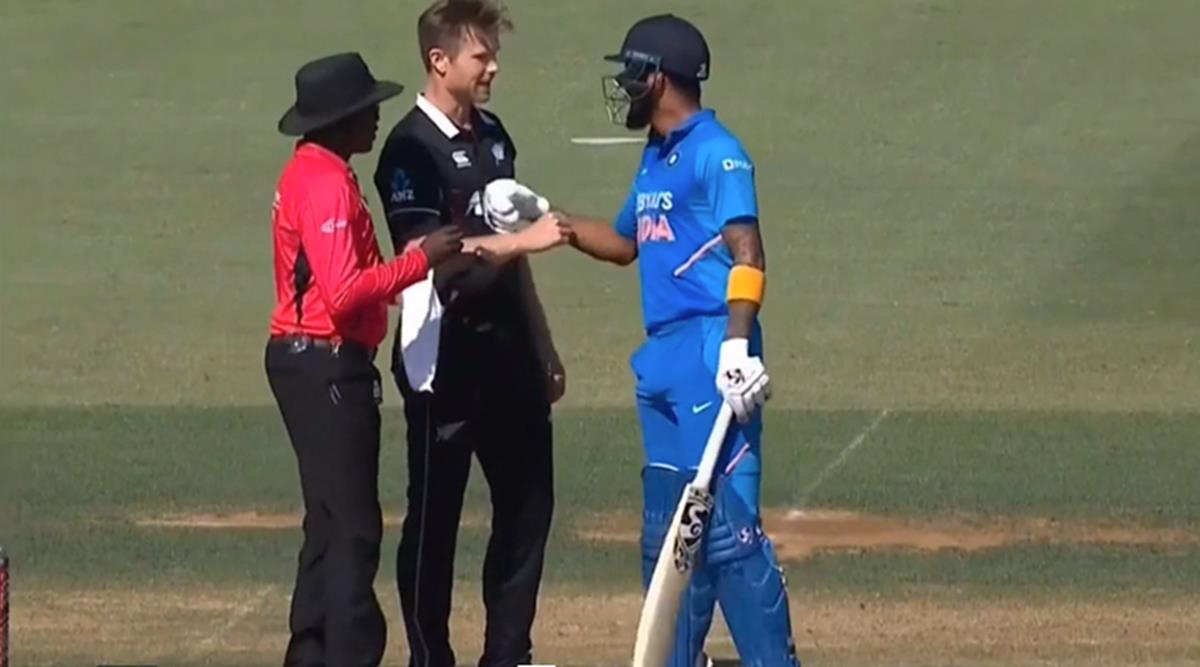 New Zealanders are well-known for their heart-warming social-skills and amiability. Even on the cricket field; time and again, the Kiwis have won the hearts of many a people with their characteristic camaraderie. So many examples- remember how Grant Elliot helped Dale Steyn back on his feet; moments after clobbering him for a match-winning six? Or more recently, in this year’s under-19 World Cup, when the Kiwi players huddled-together to carry their opposing West Indies teammate Kirk McKenzie off the field after the latter experienced cramps? The list goes on; but it’s fair to say that the New Zealand cricketers hardly ever shy away from sharing their rapport.

Something similar, although on a much more-subverted level, happened during yesterday’s India-New Zealand encounter at the Bay Oval. At some point during India’s innings, Kiwi all-rounder James  ‘Jimmy’ Neesham approached India batsman KL Rahul to have a brief exchange of words. Naturally, given the escalating tendencies of such incidents, the umpire was quick to intervene and question the situation.

Much to the umpire’s amusement, however, the players revealed that they were, in-fact, engaging in a short, friendly banter. As it would seem, Rahul and Neesham were having some pre-season strategy-discussion for the upcoming IPL season. Both of them would be representing the Mohali-based Kings XI Punjab side in the tournament this year. So Neesham, being the latest member of the KXIP family, looked in mood for an early initiation from his Punjab captain-cum-teammate Rahul.

Neesham, keeping in line with his witty social-media reputation, uploaded the picture with a hilarious caption. He further confirmed in the comments that neither of them had engaged in any form of sledging, and were just having a harmless conversation. Rahul resonated this sentiment with a clever reply from his side.

Just a bit of banter. Nobody crossed the line 😂 https://t.co/g5HmZodfYH

Don’t forget to save some runs for April aye @klrahul11 ? 👏

One could make a guess on what the Punjab duo were discussing, especially from another one of Jimmy’s tweets. Despite all of Rahul’s runs, however, the Indian team, yet again finished on the losing side. Rahul led the tourists’ performance with his fourth ODI-century, while Shreyas Iyer and Manish Pandey played some decent support-innings of their own. India finished with a decent-looking total of 296-7 in their allotted 50-overs. In reply, hosts New Zealand blazed off to yet another fine-start, courtesy Martin Guptill’s power hitting at the top. His opening partner, Henry Nicholls, held the other end firm with a sublime knock of 80-runs. In the end, all-rounder Colin de Grandhomme starred with a whirlwind 58-run cameo, handing Virat Kohli’s side a third-defeat on-trot. In the process, the Blackcaps inflicted their first-ODI series whitewash over the Men in Blue after 31-years.