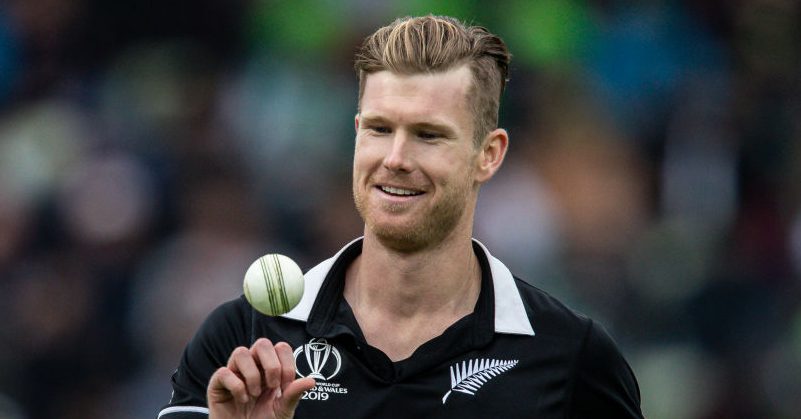 New Zealand all-rounder Jimmy Neesham has got quite a reputation for his light-hearted poke tweets. On Thursday, the Kiwi all-rounder took to his Twitter account to offer a comical insight on the rain-marred first day of the second test match between England and the West Indies in Old Trafford.

Fickle weather conditions aren’t something particularly novel to the English topography, especially at this time of the year. For context; last year’s World Cup, which spanned from late May till mid-July witnessed the cancellation of as many as 4-group stage matches due to rain. Even discounting those washed-out games, there were several matches where the DLS method had to be applied to determine the winner. The iconic semi-final match between India and New Zealand happened to be yet another game where rain played spoilsport; the match-authorities had to extend the second half of the game into the reserve owing to a rain-marred first day.

The ongoing Raise the Bat test series hasn’t been much different, at least as far as rainy interruptions go. After exactly 117 days of sans-cricket desperation, fans would’ve given anything for some uninterrupted days of good-ol’ cricket. Sadly the English rain-gods had other plans in mind; as they wreaked havoc for the majority of the first day of the first test match in Southampton last week. Thankfully, weather delays didn’t affect that game much beyond a curtailed 17.4-overs only day-one, and West Indies were able to attribute a definitive result to the match with a four-wicket win over the hosts.

But the conditions don’t appear much better here in Manchester. Day-one yesterday already experienced a 90-minute long delay owing to the continuous downpour; and there’s even more rain predictions for Saturday. Several fans vented their frustration over on social media, lambasting the English weather conditions for their frivolity. This is where Jimmy, a comfortable pick for our favorite cricketer on social media, chimed in with a hilarious jibe to one of his fans’ tweet threads.

Probably one of the reasons the British colonised the world. To find a place where they could play a damn Test match. https://t.co/pKHbVidt5p

The rainy-start prompted Windies’ skipper Jason Holder to put the damp conditions to good use as he opted to bowl after winning the toss. The decision reaped early dividends, as part-time off-spinner Roston Chase scalped the wickets of Rory Burns and Zak Crawley in the 13th over. England ended the day at 207-3, with opener Dominic Sibley patiently batting on 86 off 253 balls. Vice-captain Ben Stokes partners him on the other end at 59 off 129 balls.