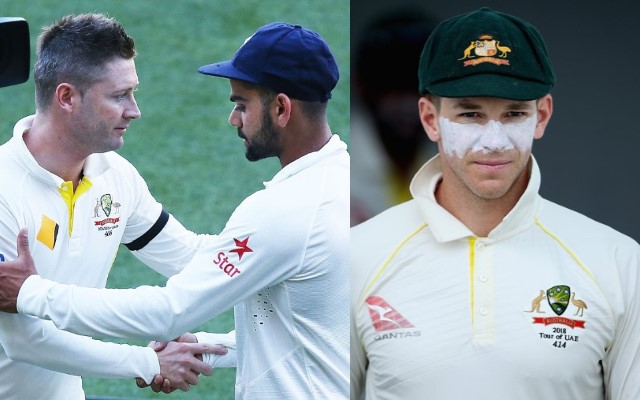 Former Australia captain Michael Clarke’s recent comments about Australia bowlers ‘worrying about their IPL contracts’ haven’t sat down well with the incumbent Aussie skipper Tim Paine. In a recent chat with ESPNCricinfo, Paine clarified why his bowlers behaved the way they did back during India’s 2018-19 Australian tour.

For context, Clarke, making an appearance in the Australian Big Sports Breakfast radio podcast; reflected on his country’s maiden home series loss to India back during the summer of 2019. According to him, the Aussie bowlers had ‘sucked up’ to Virat Kohli and his Indian teammates; just to safeguard their lucrative contracts for the upcoming 2019 season of the Indian Premier League. Further, he opined that almost every Australian bowler had refrained from ‘sledging’ Kohli-  an infamous highlight of every Australia tour; because they were ‘too scared’ of losing out on their IPL contracts.

Paine, in his recent chat with Cricinfo, rubbished those claims, and revealed that neither he nor his teammates were fretting over IPL at that point of time. Further, he clarified the reasoning behind his team’s strategy of not verbally-provoking Kohli and his teammates.

“I certainly didn’t notice too many people being that nice to Virat or not trying to get him out, or anything like that. I thought everyone who had the ball in their hand or when we were batting; was trying their absolute best to win the game for Australia,” he explained. “I’m not sure who was going easy on him; we certainly had a thing where we didn’t want to provoke any fight with him. That’s because we think that he operates at his best when he has got that extra bit of anger.”

“We had nothing to lose”- Tim Paine

The 35-year old even referred to the recently released Amazon Prime documentary, “The Test”; and highlighted that despite the lack of sledging, the series had its fair share of heated moments. One that presently comes to mind, was the brief tussle he had with Kohli back in the second match at Perth. Kohli, seemingly pumped up from a recent wicket one of his bowlers had just picked; walked up to Paine and exchanged a few words. While their discussion didn’t last long, thanks to a timely intervention from the umpires; in retrospect, things could’ve gone awry. Paine also pointed-out that several of his teammates- himself included- did not have IPL contracts in the first place; effectively rendering Clarke’s aforementioned premise of ‘losing out on the IPL’ moot.

“Who knows what will happen this series and, as we saw in the documentary, there was still quite a lot of heat in some of those games. I certainly wasn’t holding back; then again, I, and some of the other guys didn’t play IPL at the time. No one had anything to ‘lose’, if you ask me.”

He concluded by reaffirming his and his teammates’ commitment towards the Australian Baggy-Green test cap. “Anytime our guys go out and play a Test match for Australia, they’ll be giving their absolute all. I’m pretty sure they’re not thinking about an IPL contract when they’re running in, bowling to Virat,, or any other batsman, for that matter.”