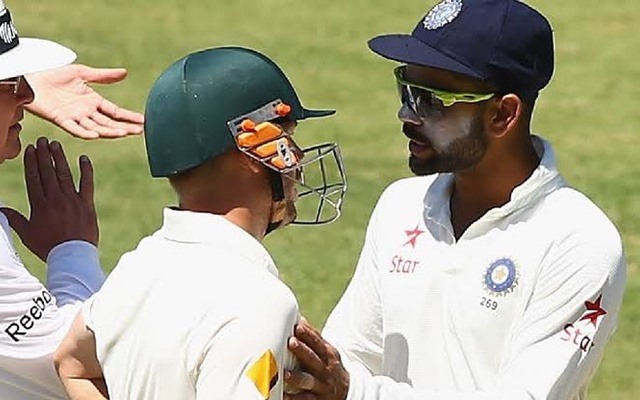 Premier Australian opening-batsman David Warner is quite a character when it comes to expressing his emotions on-field. The Paddington-born ‘Pocket-Dynamite’ doesn’t tend to hold back when it comes to giving the opposition a tough time. More often than not, he lets his bat do the talking, which has helped him the hard-hitting batsman reputation that he presently has. Having said that, the Sunrisers Hyderabad captain isn’t one to shy away from reacting verbally, and at extreme times, even physically; just to get under the opposition’s skins.

His animated-on-field behavior shares several parallels with those of the Indian captain, Virat Kohli- who himself has quite a feisty on-ground reputation. The two have, in fact, shared a few, heated animated exchanges while competing internationally, adding to the spicy flavor of the India-Australia rivalry.

But it seems that Warner is eager to put-behind much of the bad-blood he has shared with his Indian-counterparts; mostly because the provocation ends up doing more harm than good. Speaking over to the India Today group, Warner revealed that he isn’t too eager about sledging Virat Kohli or his Indian teammates the next time they meet.

“No point in provoking an angry-bear; we all know how good Virat can be when he’s flared up”- David Warner

“We all know that an agitated Virat Kohli can be a great challenge for any opposing team; no matter how good the bowling is. Virat Kohli is not a person to be poked and no point poking the bear,” Warner said.

Warner, alongside Steven Smith and Cameron Bancroft, missed the last Border-Gavaskar series in 2018 owing to the bans Cricket Australia had imposed on them for their involvement in the infamous ball-tampering scandal. The void of their absence turned out to be quite a big one for their team; their batting line-up succumbed to the likes of the Jasprit Bumrah-led Indian bowling attack, resulting in a shocking 2-1 series loss for the hosts- a feat that no other Asian team has yet been able to achieve. Warner intends to change that over in their next series against India, scheduled in Australia for late December this year.

“Excited for the India Challenge”

“It would be very surreal playing against India without the crowd. I really wish to compete against them again. We had a good team last time but they were better, and their bowling was relentless. At the moment, I think it’s fair to say that they’ve got the best batting line-up. But our bowling-attack would love to conquer that challenge. I’m certain that the Indian crowd will also be eager for that,” he added.

While the ongoing global COVID-19 pandemic has cast a veil of uncertainty around the future of any foreseeable cricket-match happening; Warner, an integral part of the SRH think tank, opined that most Aussie players would be eager to play the IPL should the CA permit them to.

“Definitely, all the players who have an IPL home will want to participate if the CA permits. But we need Government clearance for that. But if they do allow, I’m sure that most guys will be on-board to play.” he concluded.