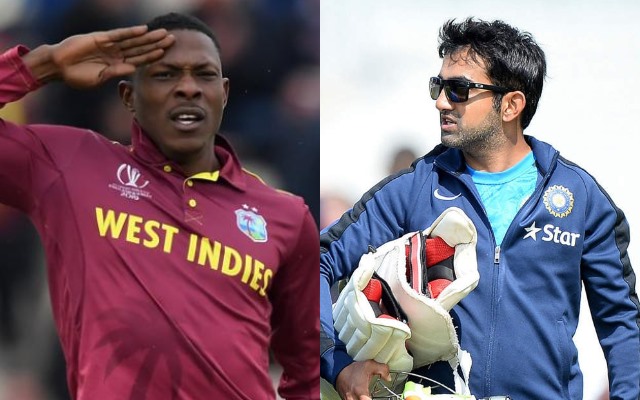 His iconic ‘salute-celebrations’ are perhaps what make Sheldon Cottrell so popular among his up and coming fan-base. Having said that, the 30-year-old ex-Jamaican Defence soldier, who is currently plying his trade in the gentlemen’s sport; has a lot-more profoundness to his on-field cricket-attributes than just fancy-celebrations.

For one thing, Cottrell operates as a left-arm seamer- a rare commodity in the current Caribbean line-up. Add to that profile his ability to bamboozle batsmen with his wily variations and ability to extract adequate bounce off the pitch; you’ll get a pretty good idea as to what makes ‘Colonel’ Cottrell’s bowling-package such a promising one.

His latest IPL franchise, the Kings XI Punjab, for one, sure seems to recognize his pedigree. Back in the auctions for IPL-13 last December, they invested a whopping sum of INR 8.5 Crores on the 11th ranked bowler on ICC’s T20I leaderboards-  making him the fourth-most expensive purchase of the event. His impressive showing in last year’s World Cup, where he scalped 12-wickets across 9-games sure helped his case. Despite those factors, many pundits felt that KXIP had over-invested on their purchase of the burly Jamaican fast-bowler.

Former Kolkata Knight Riders’ skipper Gautam Gambhir happens to be of a somewhat similar opinion. Back during the auction’s mid-break show, Gambhir had gone as far as to comment that the Anil Kumble coached-franchise paid as much as they did for Cottrell out of ‘desperation’, because the other options were already taken.

“I think Anil Kumble picked him up in desperation since they couldn’t get Chris Morris or Pat Cummins. If the demand is high and supply is low, these things happen,” the former-cricketer now turned BJP MLA had quipped.

Cottrell, as it turns out, has a few of his own insights on the matter. Over on a recent Instagram live-chat with Crictracker, Cottrell had an upfront response to Gambhir’s criticism.

“Did he really say that? I wasn’t aware of the comment by Gambhir.  What I will say, is that my work speaks for itself. I don’t know why he made that comment. All I know is that it takes one hell of a luck to be a part of a team as close-knit as KXIP. I am sure I can be a great addition to any IPL team,” he said.