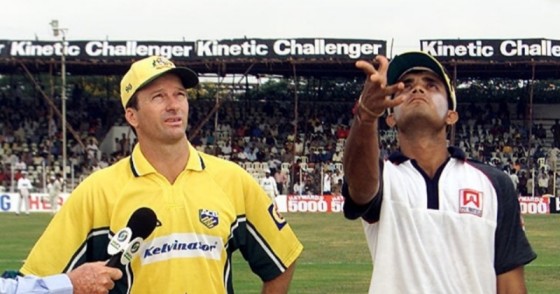 Former India captain and the present BCCI president Sourav Ganguly turns 48 today. Fans all across the country admire the Kolkata-born opener for his dauntless and counter-attacking captaincy style; which has been a defining feature in the Indian team’s remarkable transition from challengers to title-contenders.

As a fun, toast to the birthday boy on his 48th birthday bash, we thought it would be fun to look at some of his entertaining on-field bloopers. Thankfully, Ganguly’s recent interview with the Indian team’s test-match opener, Mayank Agarwal, provided us that exact kind of fun stuff. Over on his appearance on Mayank’s Twitter segment Open Nets, Dada revealed an interesting snippet of his erstwhile captaincy.

“Ganguly never arrived on time. Always late, and I hated him for that”- Naseer Hussain

In a recent chat with Star Sports, former England captain Naseer Hussain had claimed that he used to dislike Ganguly for arriving late at the toss. “Sourav is like that. When I played against Sourav, I hated him; he used to make me wait for the toss every single time. I was like, ‘Ganguly, it’s 10.30, we have to toss’, but he’d never be on-time. Even during last year’s World Cup, when we were commentating, he was late.”

“I guess it’s something that just comes with him, so we can’t do much about it, can we? End of the day, he’s a lovely bloke, the way every cricketer should be. He got under my skin when we played, but outside of the field, he is a great guy. I’m happy to know him as well as I do,” Hussain had said on Star Sports’ Cricket Connected Show.

Well, turns out Ganguly has a rather fun backstory behind his on-field tardiness. In his interaction with Mayank, Ganguly revealed that his late-appearances (most of them at least) weren’t intentional and backed up with a pretty good excuse.

“I forgot my blazer, but they were pretty annoyed, so it worked on the Aussies”- Ganguly

“It was an accident. In the first Test match, I left my blazer in the dressing room. They were such a good side and I was nervous in that series because it was my first big series as captain. Last 25-30 years I haven’t seen a team as good as Australia in that generation. Initially, I forgot my blazer in the first Test but then I realized that he reacted to it. It was working on them, working on the team, and how they went about their jobs. They were a bit grumpy with all that and it worked for us as we won the series 2-1,” Ganguly revealed.

Having said that, as far as his punctuality issues are concerned, Australian captain Steve Waugh seemed to understand that it was all in jest. “Steve Waugh is a friend and I have tremendous respect for him as a cricketer. It was all in good humor,” he concluded.