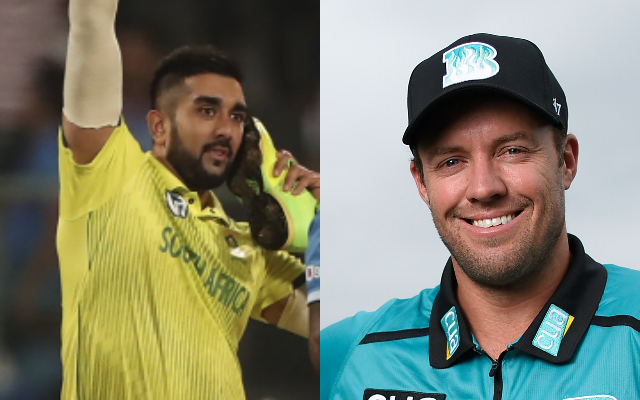 South African leg-spinner Tabraiz Shamsi has quite a reputation for his wicket-celebrations. Back in 2016, Shamzi’s ‘bus-driver’ celebration against the Sunrisers Hyderabad quite upset opposing captain David Warner. Back in the 2018 MSL, the ICC even forbade him from pulling off a ‘mask’ celebration. In recent times, although his celebrations haven’t been as controversial; they’ve still managed to attract a fair bit of buzz.

His iconic ‘magician’ celebration, for one thing, went down quite well among the fans. More relevant, though, is his recently unveiled ‘shoe-phone’ celebration. For a gesture as comical as using his shoe as a phone- there’s quite an interesting backstory behind it. Not to mention- former Protean skipper AB de Villiers is also involved.

Over on a recent web-interaction with Crictracker, Shamsi clarified as to why he prefers celebrating with such passion. “A lot of people think I am not focussing on my game but only on my celebrations. But, it is just my way of making memories,” Shamsi explained. Further, he revealed what motivated him for the shoe-phone celebration.

“Shoe-Phone celebration came from umpires; they go upstairs to the third umpire when they are in doubt. It’s like they’re making a phone call. I remember a Titans game where I was speaking to AB de Villiers about dismissing a certain batsman. We discussed the plan to dismiss and it actually worked out. AB couldn’t play that game, but I had promised that I would call if the plan worked. So that’s how it happened,” Shamsi said looking back at the comedy of the situation.

“Wanted to be a magician when I was young”- Tabraiz Shamsi

The 30-year old chinaman, who plies his trade for the Paarl Rocks in the Mzansi Super League also opened up about his past aspirations of becoming a magician. Those dreams, in fact, actually helped him come up with one of the most spectacular modern-day celebrations.

“Coming to the magician stuff. Growing up, I had a real knack for performing magic tricks. I even considered it as a career option up to a certain point. Later, obviously, the game of cricket took over and I started taking the game seriously. I couldn’t practice more magic tricks, but it has still been one of my hobbies, it’s something I enjoy just to see the amazing faces when they don’t understand what’s going on,”