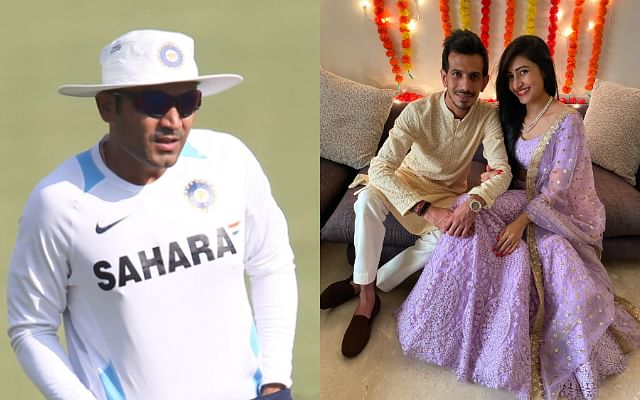 Social media went on full frenzy mode yesterday as beloved team India leg-spinner posted pictures of his engagement ceremony. Yuzi took to Twitter to announce his surprise engagement with fiance Dhanashree Verma, who is a social media influencer. Chahal captioned the picture of his Roka ceremony, which read, “We said “Yes” along with our families #rokaceremony”.

As mentioned, social-media wasted no time in felicitating the happy, engaged couple. Among his cricket-circles, the likes of Virat Kohli, Shikhar Dhawan, and Bhuvneshwar Kumar were among the first to wish Yuzi. Other celebs like Urvashi Rautela, Red FM’s RJ Raunac, Ammy Virk- among many others- were also quick to join the party.

The most entertaining tweet, however, came from former Indian opener, Virender Sehwag. Viru boasts of having quite a funny bone when it comes to Twitter-based banters. True to his nature, he didn’t disappoint, and posted a hilarious tweet that referred to one of Indian Prime Minister Narendra Modi’s recent quotes. Here’s what he wrote:

On a lighter note, Chahal, and his Royal Challengers Bangalore captain Virat Kohli would be hoping for his lady-luck to manifest on-field in RCB’s upcoming IPL campaign. Chahal’s incisive leg-break bowling will be key to RCB’s chances of succeeding in the UAE-based season of the Indian Premier League, which starts from September 19. As per the existing schedule, RCB’s opening match will be against the Kolkata Knight Riders’ on 20 September.