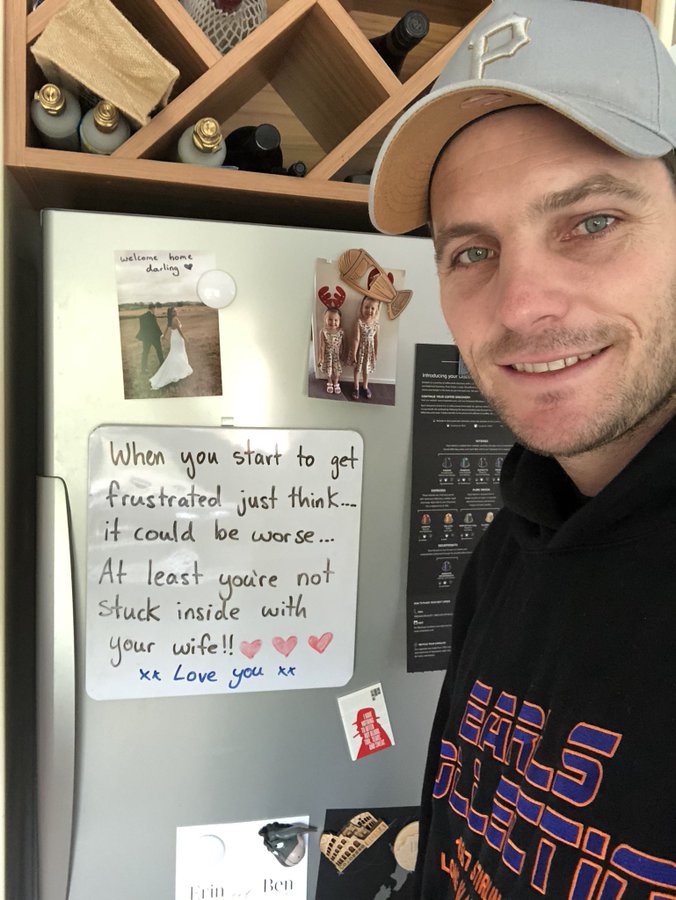 Fast-bowler Mitchell McClenaghan filled in the most recent entry in the list of players leaving the Pakistan Super League in wake of the prevalent COVID-19 threat. On Monday, the Karachi-Kings pacer posted a hilarious tweet to offer a comical-take on his perplexing home-coming situation.

McClenaghan, who played just one-game in the PSL against the Multan Sultans; flew back to his home-country New Zealand yesterday. His fellow countrymen Luke Ronchi and Colin Munro had already departed; partly because their team, Islamabad United, had already failed to progress into the semi-finals. Upon arriving at his house, the 33-year old was greeted by a refrigerator stick-on from his wife, Georgia England. ‘Big-Mitch’ decided to share his ‘legendary wife’s’ sense of humor, and uploaded this on his Twitter account.

Straight home into isolation, get home to this note from my legendary wife who’s gone to stay with her parents for a few weeks. See you guys in 14 days 👌 pic.twitter.com/GjEo4n4Vhk

As a precautionary measure, the New Zealand government has appealed to its recently immigrated-citizens to isolate themselves for two-weeks. Georgia’s attempt to smugly flaunt her comical-aptitude succeeded to full fruition. Nonetheless, she decided to end with an adorable ‘Love You XX’ message for her returning hubby. Aww!

With Mitch, and Lahore Qalandars’ batsman Chris Lynn’s exit, the PSL has now lost as many as 16-foreigners to coronavirus-pandemic. That said, stars like Ben Dunk, Moeen Ali and Chadwick Walton have decided to extend their sojourn until Wednesday; the rescheduled-date of the tournament’s finale. Additionally, each of the four-franchises have roped in services of local players to compensate for the players who’ve left.

Both the knockout-matches are scheduled for Tuesday; first Multan playing Peshawar, followed by Lahore locking horns with Karachi. The final-match will take place a day later on 18 March. Lahore’s Gadaffi Stadium will host each of the mentioned-matches in a closed door-fashion. Despite the absence stadium-entry being, fans will be able to enjoy the matches live on television.