Reason why Quinton de Kock is not playing today: Keeper-batsman withdraws from SA vs WI clash 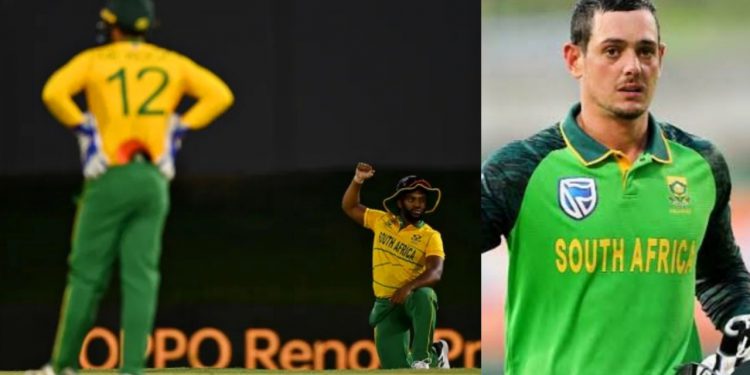 Why Quinton de Kock is not playing today

Reports suggest that the South African wicketkeeper has made himself unavailable due to a directive by Cricket South Africa (CSA). The South African board, in support of the ‘Black Liver Matter’ movement, asked the team to “take a knee” ahead of all the matches in the T20 World Cup 2021.

The Board earlier had issued a statement in which it gave the players three options to show their support towards the movement- kneel, raise a fist, or stand to attention. However, Quinton de Kock, on many occasions was seen standing casually with his arms held back.

Earlier this year, during the test series against West Indies, de Kock even refused to reveal the reason regarding him not ‘taking a knee’ for the BLM movement. “My reason? I’ll keep it to myself. It’s my own, personal opinion,” he said back then. It is hence being reported that Quinton de Kock withdrew from today’s match because of his stand on the BLM movement. He was the only one to not take a knee during South Africa’s last match as well.

Teams taking a knee is now a usual scene ahead of various international games throughout various sports. Team India as well joined the movement during the ongoing T20 World Cup ahead of the Pakistan match. Teams like Australia, England, and South Africa have been practicing the popular gesture for a while now.

In the absence of de Kock, Reeza Hendricks has been brought into the XI. The 32-year old has played a handy innings of 39 runs in just 30 balls.