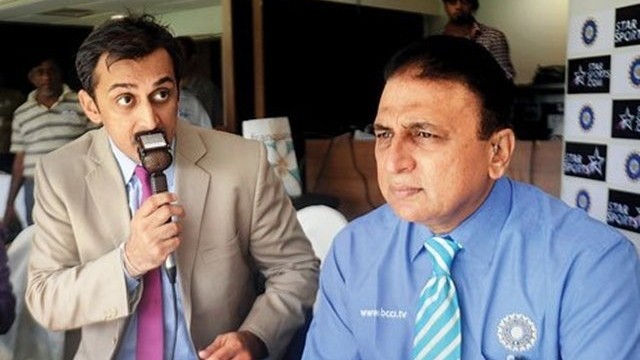 Indian cricketing legend Sunil Gavaskar found himself in a tight spot after he made a comment on Virat and Anushka on-air. His comment stirred a big controversy and fans started trolling him left, right and centre deeming the comment sexist. Sunil Gavaskar’s son Rohan Gavaskar has now hit back at the trollers with a cryptic tweet.

It was during the match between Royal Challengers Bangalore and Kings XI Punjab when Sunil Gavaskar was in the commentary box with Aakash Chopra. They were having a normal conversation about how more practice can help a batsman do better. Gavaskar said, “Virat jante hain ki jitni wo practice karein ussi se wo behtar ban sakte hain. Lockdown me to bass unhone Anushka ki bowling ki practice ki, humne video dekhi hai” (Virat knows the more he practices, the better he will get. During the lockdown he has only practiced against Anushka’s bowling, we saw the video).

The comment made by Sunil Gavaskar was fabricated by few websites and it went viral and people started trolling the legend. Some websites misquoted it and wrote, “Inhone lockdown me to bas Anushka ki gendon ki practice ki hai”. People started calling out Gavaskar without even watching the original video.

Even Anushka Sharma posted an angry Instagram story based on the misquoted comment. She expressed her unhappiness and wrote that the comment was distasteful indeed. The comment that Gavaskar made was blown out of proportion and after watching the original video, people started supporting Sunil Gavaskar. Even a lot of ex-cricketers came out in support of the legend.

Gavaskar’s son Rohan Gavaskar took a dig at trollers as he posted a cryptic tweet. The tweet said, “I love cholocate. Read it again. This is how you fail your exams.”

The whole incident is definitely a lesson for all of us. We must not believe everything we read on the internet and form our opinion. As in this case, people got to know that the comment was absolutely taken out of context.