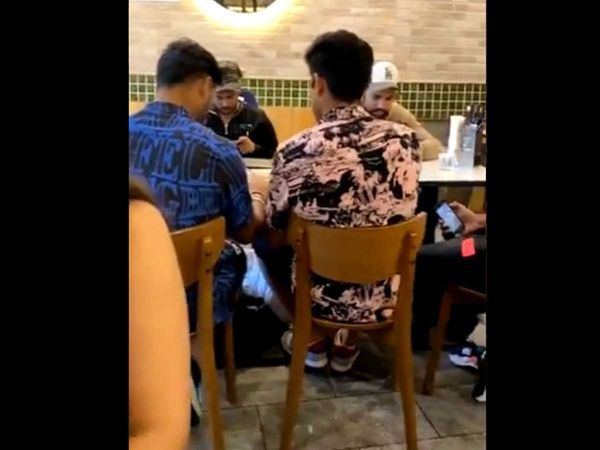 Vice-captain Rohit Sharma, alongside four other members of the Indian test team, have been placed in isolation on account of potentially breaching the bio-bubble. According to sources, Rohit, Shubman Gill, Prithvi Shaw, Rishabh Pant, and Navdeep Saini came in contact with an Indian fan at a restaurant in Melbourne. The Board of Control for Cricket in India (BCCI) and Cricket Australia (CA) have launched an investigation on the matter.

On Friday, Twitter user Navaldeep Singh posted an image of himself dining in the same restaurant as the four players involved. The word going around is that Navaldeep anonymously cleared the bills of the dining Indian players. This, allegedly, promoted Pant to hug him. We say ‘allegedly’, because, in a post made yesterday, Navaldeep himself states the same. But in a clarification post issued today, he explains that the ‘hugging’ part was untrue and just something said in excitement. Here are the relevant tweets from Navaldeep’s account:

They are not aware but i have paid there table bill 🙂 . Least i can do for my superstars 🤗 pic.twitter.com/roZgQyNBDX

When they got know that i have paid the bill.. Rohit sharma said bhaji pese lelo yaar acha nai lagta.. i said no sir its on me. Pant hugged me and said photo tabhi hogi jab pese loge wapis. I said no bro not happening. Finally sabane photo khichwai 🙂 mja aa gya yaar #blessed

Regardless of whatever transgressed, both cricket boards have taken immediate precautionary measures. Although the BCCI did clarify in a statement that all protocols had been followed. The aforementioned players, while isolated from the team, can still be able to train normally.

“Players will be permitted to train in accordance with the strict protocols that have been put in place to ensure the ongoing safety of all members of the Indian and Australian squads,” Cricket Australia’s official statement read. Essentially, the five players will have to maintain social distancing even while travelling with the team.

The post-COVID-19 lockdown era has seen a few similar incidents of bio-bubble breach/ negligence in the past. Most recently, Brisbane Heat captain Chris Lynn and English import Dan Lawrence had to pay heavy fines for breaking distancing protocols. The duo got separated from the rest of the team and had to even play the game while maintaining social distancing.

Earlier this year, England all-rounder Jofra Archer had to sit out of the second test against West Indies when he broke the bubble to meet with his girlfriend. Archer had to isolate himself and return two negative tests before rejoining his teammates.

There’s still ambiguity on the situation as to whether protocols were or weren’t breached. If found guilty, vice-captain Rohit Sharma will certainly come under scrutiny. The Indian team and fans would be hoping for the matter to resolve soon; so that the maligned players can feature in the upcoming third test match at Sydney starting from January 7.