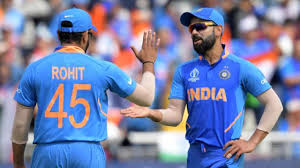 Rohit Sharma As Team India T20 Captain: Gambhir
Gautam Gambhir is of the opinion that current team India captain Virat Kohli should make for Rohit Sharma to lead the team in the T20 format. Considering his success in the Indian Premier League, where he has led the Mumbai Indians to five titles, Gambhir feels Rohit Sharma should also captain the Indian Team. “Not giving him the captaincy in the shortest format is not his but India’s loss”, Gambhir added. Gambhir also expressed his reactions over Virat Kohli’s failure to lead Royal Challengers Bangalore to their maiden IPL title.

Akash Chopra Disagrees With Gautam Gambhir
Fellow commentator Akash Chopra didn’t quite agree with Gambhir’s view and felt Rohit Sharma’s success in the domestic league shouldn’t be his pathway to leading the national team. Chopra finds Virat Kohli as the best fit for captaincy across all formats of the game. Chopra also made a comparison of the two sides that the players lead, stating would Rohit Sharma be as successful if he had to lead the Royal Challengers Bangalore.

“Gautam Gambhir believes that it is the nation’s misfortune if Rohit Sharma is not made the Indian T20I captain because he is the most successful captain in the IPL. But I have a question, that if Rohit was given the RCB team, which is there with Kohli, will he have won two, three or four out of the five titles MI have won?”, Chopra questioned.

Rohit Sharma Included In Test Squad, Kohli To Return
Rohit Sharma who will miss the limited-overs series in Australia has been included in the test squad. Meanwhile, Virat Kohli will be returning back after the first two tests as he wants to be home for the birth of his first child. The schedule for India’s tour to Australia was confirmed in October. The ODIs series will start on November 27 followed by matches on November 29 and December 2. The T20Is will be held on December 4, 6 and 8 followed by the first of the four-Test matches in Adelaide from December 17.