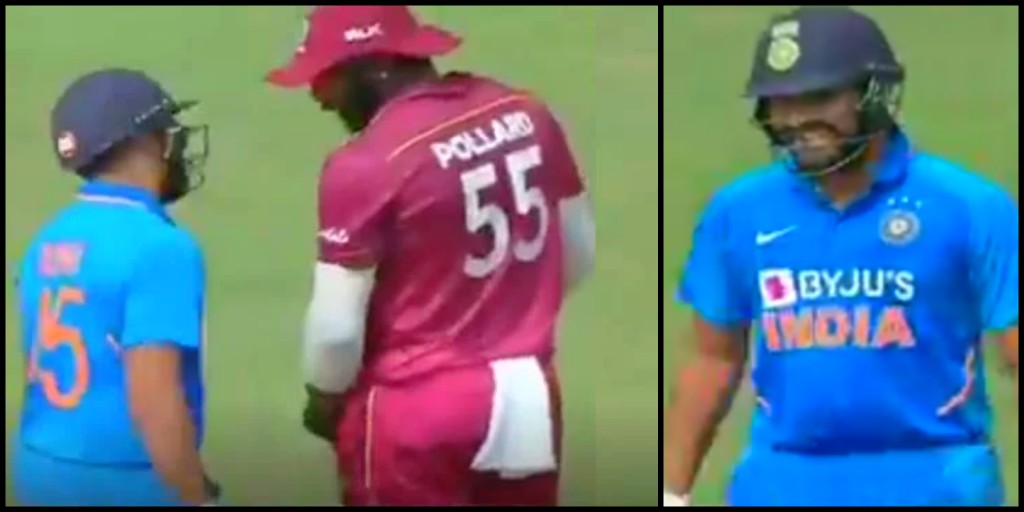 Indian skipper Virat Kohli is known for his aggressive behaviour on-field and in the heat of the game, he usually uses abusive words. Many times the 31-year old has become a meme material for his cuss words. But now it looks like Rohit Sharma is also sitting on Virat Kohli’s train.

During the South Africa tests series, vice-captain Rohit was caught abusing Cheteshwar Pujara when he declined to take a single. He used the cuss word which Virat Kohli is famous for. Rohit caught saying, “Bhaag Puji *******”. Ben Stokes whose name is similar to that cuss word is well aware of this. Stokes couldn’t stop himself from having a dig at both Virat and Rohit. Stokes had tweeted, “This time it’s Rohit, not Virat….if you know you know,”

Now again, during India vs West Indies ODI match, Rohit caught abusing. This time he was seen joking around his Mumbai Indians teammate Kieron Pollard. A video of both Sharma and Pollard has been doing the rounds on social media platform Twitter. Rohit caught telling Shreyas Iyer “Yeh bakhchod hai [He talks bullsh*t],” After this incident, twitter was noticed posting some hilarious memes on this.

Talking about the match, the Indian team was invited to bat by the Carribean side. Hosts didn’t have a good start of the innings as they lost both KL Rahul and Virat Kohli on 25 in the same over of Sheldon Cottrell. But then Rohit Sharma and Shreyas Iyer’s partnership brought India to a good position.

After Rohit’s wicket, Iyer was well supported by Rishabh Pant who scored his maiden ODI fifty. The 22-year old keeper-batsman scored 71 off 69 balls. Iyer departed scoring 70 off 88 balls. In the end, Kedar Jadhav (40) and Ravindra Jadeja (21) helped the team to put 287 runs on the board. When this article was posted, the West Indies were in a great position during the chase. Visitors were playing on 136 after 25 overs losing one wicket. Hetmyer and Shai Hope were set at 82 and 43 respectively.