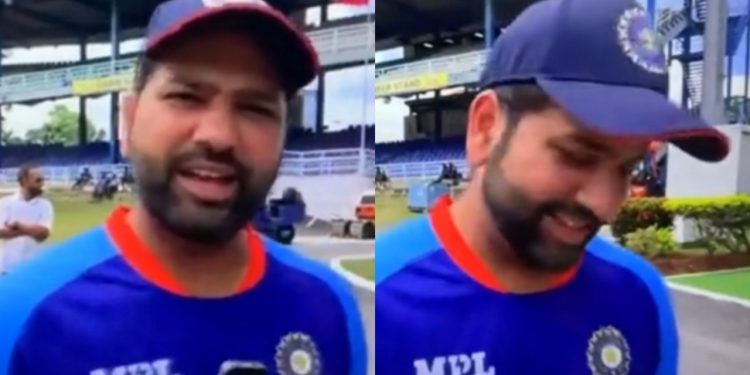 Team India is currently touring West Indies and having won the ODI series by a margin of 3-0, they are now eyeing the 5-match T20I series which starts today. All the big names have been on rest and almost a second-string Indian team has been battling the Caribbean team on their own turf. Recently, while talking on Jamie Alter’s show, Pragyan Ojha talked about Rohit-Dhawan’s partnership and when asked about it, Rohit Sharma delivers an epic reply.

Former cricketer Pragyan Ojha who bid goodbye to international cricket in Feb 2020 is now being seen in the commentary box. The former Indian spinner represented the team in a total of 48 international matches which includes 24 Tests, 18 ODIs and 6 T20Is. He recently appeared on Jamie Alter’s show The Alternate View where he talked about Rohit-Dhawan camaraderie. The current Indian skipper was asked about Ojha’s comment to which Rohit Sharma delivers an epic reply.

Rohit Sharma was on a break along with other senior players while Shikhar Dhawan led the side in the 3-match ODI series against West Indies. Pragyan Ojha feels that Dhawan will definitely be a part of the ODI World Cup which will be held in the year 2023. The former spinner feels that the Indian captain would want Dhawan in his team owing to the partnerships they have made in ODI cricket.

“They have both done a brilliant job together. I think in world cricket they are third or fourth and Rohit believes that if someone is consistently performing or has done really well over the years, he can’t be discarded. Rohit definitely gives you that cushion and it’s a good thing because, in ICC events, you need a little bit of experience,” said Pragyan Ojha while talking on Jamie Alter’s show.

Rohit Sharma will be back as the captain for the Indian team in the T20I series and will lead his troops. After completing a whitewash in the ODI series, team India would like to continue their good run in the T20 games as well. West Indies can be a different team altogether when it comes to T20 cricket, therefore the Indian team will have to play their A-game if they want to win the series.