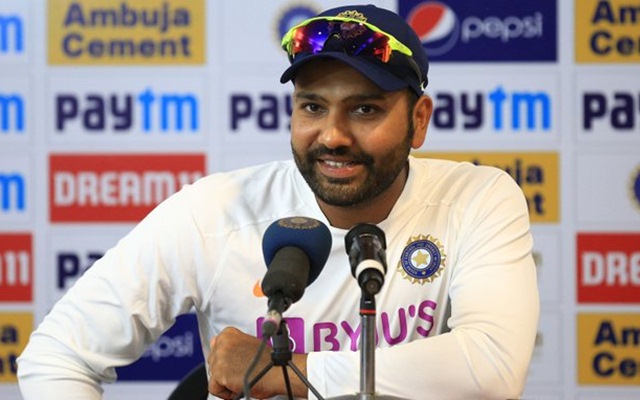 Rohit Sharma has shut the mouths of his haters with his outstanding performance in the ongoing series against South Africa. Before this series, Rohit had always batted down the order in tests while his favourite position is opening. Rohit failed to give his best in South Africa and England tour and got dropped from the test side. However, he has always been a great performer at home in the tests.

KL Rahul failed to live up to the expectations as his test performance in the last one year is highly inconsistent. Following which he was dropped from the side and Rohit Sharma was picked as an opener for the home test series vs South Africa. Eager Rohit picked this chance with both hands.

He smashed 2 centuries in the first test and today he scored his first double hundred in test cricket. So far in this test series, 32-year old has scored 529 runs in 4 innings averaging 132.25. Not only that, he has hit 19 sixes in the series which is most for a batsman in a Test series.

At the end of the day, Rohit Sharma interacted with media at the press conference. Right-handed batsman responded cheekily on journalists for criticising him at his bad phase. Rohit said, “Whenever you get an opportunity, you want to make the most of it. You want to perform as well as possible. When I got this opportunity to bat at the top of the order, I wanted to make full use of it. Otherwise so many things would have happened. You guys would’ve written a lot about me,”

Rohit Sharma as an opener is very effective in every format of the game. In limited overs too, once Rohit’s career was going downhill. Then MS Dhoni had decided to promote him at the opening slot. This one decision had changed Rohit Sharma’s life. He has scored 3 ODI double tons as an opener. And with his maiden Test double ton today, he has announced that he is set to dominate test cricket too.