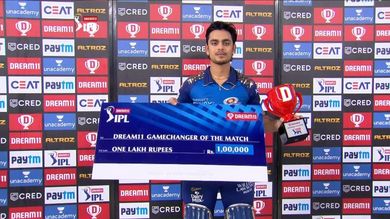 Monday’s match between Mumbai Indians and Royal Challengers Bangalore ended in yet another super-over finish- the second of this season; to add on to the flavor of what has, so far, been a fascinating edition of the Indian Premier League.

Ishan Kishan, the young Mumbai batsman, had nearly pulled off a successful 202-run chase and looked set to score his maiden IPL century. But a loose shot in the penultimate ball of the innings handed a simple catch to Devdutt Padikkal and ended his stay at 99. Needing 5-runs to win off the last ball, Kieron Pollard smacked RCB’s Isuru Udana for a boundary over square-leg, taking the match to a tie-breaker.

Fans were expecting the in-form Kishan to be one of MI’s batting picks for the super-over. Instead, the team decided to go with Hardik Pandya, Kieron Pollard, and captain Rohit Sharma as their options; a left-field move that left many pundits confused. As it later turned out, the move backfired; as RCB’s Navdeep Saini bowled brilliantly and kept Mumbai restricted to just 7-runs. Neither Pandya nor Pollard were able to time the ball well, which made a lot of MI fans question Rohit for his choices.

“Ishan was fatigued; was coming after injury, didn’t want to risk him”- Rohit Sharma

But it now seems that the Mumbai Indians had a valid reason behind not playing Kishan. During his post-match interview, Rohit revealed that Ishan was drained out after his innings, which prompted the MI management not to risk his fitness. “He (Kishan) was drained out and was not comfortable. We thought we could send him but he was not feeling fresh,” Rohit revealed. Further, he backed the decision of promoting Hardik Pandya to bat at that stage of the game.

“We trust Hardik to hit the long balls. It doesn’t always come off, but we are confident he can pull things off for us. I mean, with only 7 runs you need to have luck on your side. We couldn’t get the wickets. Then AB also played a good boundary. We made a strong comeback, so there’s a lot that we can take from this game,” he said.

Rohit also had a few words of praise for the RCB fast bowlers for taking the game so deep. In recent years, the RCB team has quite struggled to settle on a strong, death bowling combination. The team has infamously lost many matches from winning positions because they weren’t able to address their death-overs specialists properly.

This season, though, RCB’s Indian bowlers- in particular, Navdeep Saini and Shivam Dube- seem to be taking care of that role. In this match as well, Navdeep kept things tight by giving only 12-runs off the penultimate over. Rohit believes that such a spirited performance from their bowlers helped them maintain their nerves better, and subsequently, further upheld their grip over the match.

“RCB held their nerves more than us”

“We had a great game of cricket. How we started with the bat, it looked very hard to make a comeback from that point. Great innings by Ishan there and then Pollard was brilliant as usual for us. It is just that we couldn’t start well. I thought we could chase 200 with the batting power we have. We didn’t get the momentum in the first 6-7 overs and also lost three wickets

“The way Polly and Ishan were playing, anything was possible. Nothing to take away from RCB they held their nerve more than us,” Rohit concluded.