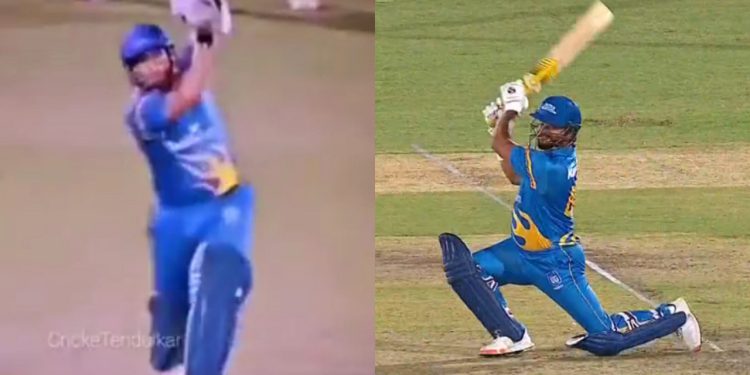 Stuart Binny’s 82 off 42 helped India Legends post 217 on the board and unsurprisingly, the response from RSA Legends wasn’t great. They could only muster 156 for 9 off their 20 overs and lost the game by 61 runs.

Sachin Tendulkar and Suresh Raina fill the Fans with Nostalgia

Little Master and Naman Ojha opened the batting for India Legends, sharing a 46 run stand between them. Seeing Sachin bat, in particular, was something everyone looked forward to.

Though Tendulkar could not put on a big score, he sure reminded the fans of the good old days, executing a cracking on-drive on the 2nd ball of the fourth over.

Sachin Tendulkar fell for an individual score of 15 and following that, another superstar from the past, Suresh Raina walked out to bat.

Much like Master Blaster, Raina also played his trademark shot in the game to fill the hearts of the fans with emotions & nostalgia. The clip of the southpaw smashing an inside-out shot to get off the mark can be seen below.

Those Inside Out shots were a feast for the eyes!! ???
Good comeback by the local boy Suresh Raina ?@ImRaina #SureshRaina #Raina pic.twitter.com/wpbGoOQHI6

The tournament will be running up until the Final on October 1, 2022 and comprises 23 matches in total. Many role models of the 90s and early 2000s kids –Shane Watson, Sanath Jayasuriya, Brett Lee and Brian Lara, etcetera– will be seen in action over the next three weeks.