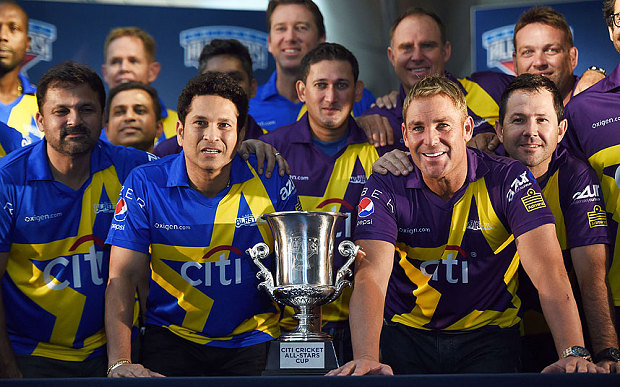 All the 90’s era legends have retired from the cricket. Some are now commentators, some have turned coaches while some enjoying retired life with families. But fans still follow their favourite players and they have great memories attached to them. Fans always want these legends to return to cricket. Sachin Tendulkar, Virender Sehwag and other legends have played in some T20 leagues after retiring from all formats.

The most popular tournament of retired players was ‘Cricket All-Stars’. It was played between teams led by Sachin Tendulkar and Shane Warne. The venue of this tournament was the USA and matches took place in 2015 in baseball grounds. Warnes Warriors had beat Sachin’s Blasters in all three matches. In 2017 and 2018 there were talks of the return of the tournament but it didn’t happen.

Now it’s great news for the fans that they can see retired players playing cricket again. Tendulkar, Lara, Sehwag, Brett Lee, Rhodes and many more legends will play in Road Safety World Series in India next year. It will be a T20 league which is planned as an annual tournament. World Series is featuring retire cricketers from five countries which are Australia, South Africa, Sri Lanka, West Indies, and India. The tournament will take place in India from 2-16 February next year.

The tournament has received No Objection Certificate from the BCCI. The T20 league will promote road safety. Sachin Tendulkar is the official brand ambassador for the tournament while Viacom 18 has named official broadcaster. However the number of teams and details about the matches yet to decide.

A total of 110 players have confirmed their participation for the league. The tournament will feature the following teams: India Legends, Australia Legends, South Africa Legends, Sri Lanka Legends and West Indies Legends. However, the squads are yet to announced. Sachin Tendulkar will make his return to the cricket third time since his retirement. After his retirement in 2013, he has played for MCC against Rest Of World XI at Lord’s 2014 and 3 T20 matches at ‘Cricket All-Stars’.