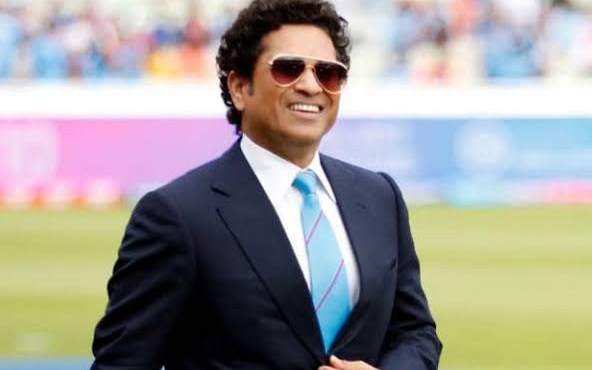 Former India batsman Sachin Tendulkar has faced much flak on social media for his recent tweet on the subject of Indian farmers protest. The legendary opener copped some threatening and unsavoury tweets from social-media users on his social accounts over the past week for publically taking the stance #indiaagainstpropaganda. But amidst all the hate and negativity he has been receiving; some fans recently offered him a welcome break of positivity, as they gathered around his house to show solidarity.

On Wednesday morning, several people were spotted outside Sachin’s property of residence in Mumbai. These people held banners with Sachin’s images and slogans in their hands and kept chanting his name. At one point, as is evident from the video, they even started chanting slogans of “We support Sachin”. The kind of support these ‘fans’ offered was reminiscent of Sachin’s playing days; back when fans proudly chanted his name in the stadium. Here’s a video of the incident (courtesy Times Now):

Fans gather outside cricket legend @sachin_rt's residence in Mumbai to express their support for the Master Blaster after his tweet on #FarmersProtest invited criticism. pic.twitter.com/LgmxOzecNS

For those out of the loop, Sachin joined a slew of Indian celebrities in taking a stand on social media that was initiated by the Indian Foreign Affairs Ministry. After several international icons like pop-singer Rihanna and teen activist Greta Thunberg commented on the country’s ongoing farmer-protest situation; several prominent Indian personalities were quick to label their intervention as ‘propaganda’. Sachin was happened to be one of those celebrities, which, consequently, opened him up to some scathing criticism from fans. And not just fans; several prominent journalists inside and outside of the cricketing fraternity also criticized Sachin.

India’s sovereignty cannot be compromised. External forces can be spectators but not participants.
Indians know India and should decide for India. Let's remain united as a nation.#IndiaTogether #IndiaAgainstPropaganda

Besides Sachin, several prominent members of the current Indian cricket setup; including captain Virat Kohli, and vice-captains Ajinkya Rahane and Rohit Sharma, aired their opinions on the matter. Although notably, none of them copped as much criticism as Sachin did; possibly because they didn’t use the word ‘propaganda’ or like.

Also Read: Top 5 Most wicket-takers  for India in test

Nationalist Congress Party (NCP) leader Sharad Pawar also slammed Sachin for his stance. Pawar, a former president of the BCCI, said: “Many people have reacted sharply to the stand taken by them (Indian celebrities). I would advise Sachin (Tendulkar) to exercise caution while speaking about any other field.”