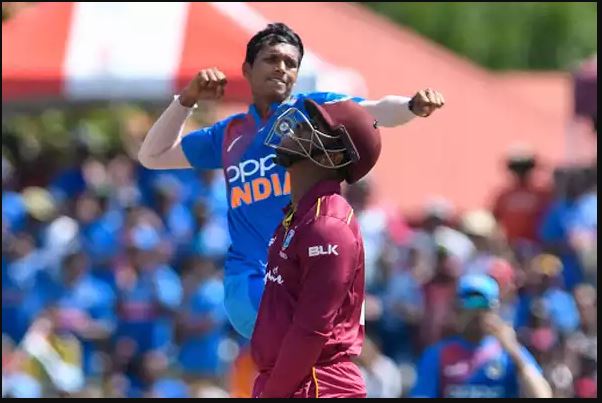 Navdeep Saini starred as the man of the match in India’s four-wicket win against West Indies in the first T20I of the three-match series at Florida on Saturday.

After Virat Kohli won the toss and elected to field first, India stumbled West Indies for 33 for loss of five wickets in the mandatory powerplay.

Washington Sundar lead the attack and in his second delivery got the wicket off John Campbell. Bhuvneshwar Kumar in his final ball of the second over bowled Evin Lewis using his knuckle ball. This was the second instance where both the West Indies openers were dismissed for ducks.

Saini who was playing his debut International match in the blue jersey was smashed for a six by Nicholas Pooran in his very second ball.

The 26-year-old made a comeback as he got two back to back wickets of Pooran and Shimron Hetmyer.

Pooran’s pull failed and his top-edge shot went way up in the air and landed safely in Rishabh Pant’s gloves. The next delivery Hetmyer dabbed the ball on to the stumps to create a hat-trick chance for Saini which he couldn’t get.

Navdeep Saini also denied Kieron Pollard to add another half-century to his career as he got him lbw through a full-toss ball in the final over of the innings. Saini bowled the final over as a maiden-wicket over.

Pollard, who played in T20I’s after six months, scored run-a-ball 49, with two fours and four sixes. Pollard’s runs helped West Indies to post a scanty total of 95 for nine after 20 overs.

India took 18 overs to complete the low score chase. Rohit Sharma made 24 before slogging Sunil Narine to lose his wicket. Manish Pandey who was back to the squad played a couple of drives for boundaries and scored 19 before being bowled by Keemo Paul.

Washington Sundar finished off India’s chase with a six over long-on. India will play their next game on the same venue on August 4.