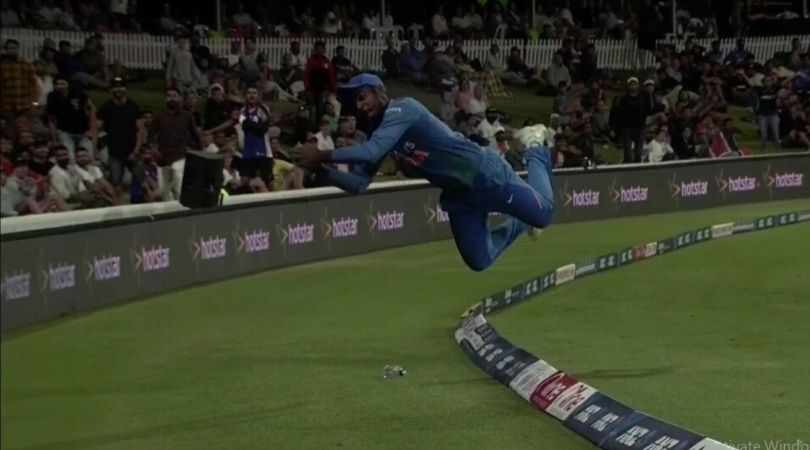 Sanju Samson Flown Into The Air To Save Four Runs In The India T20 Match: On Sunday, Team India and New Zealand played the fifth and final match of the T20 series at Bay Oval in Mount Maunganui. Indian skipper Virat Kohli chose to give rest to himself and play Sanju Samson ahead him. In the absence of Virat, Rohit Sharma played skipper’s role in the match. Meanwhile, during the last match of the series Team India defeated the hosts by 7 runs to whitewash the series with 5-0.

Sanju Samson once again failed to prove his worth with the bat in the team. However, he again displays an exceptional fielding effort to save four runs for his team. It all happened in the 8th over of the New Zealand innings when veteran batsman Ross Taylor hit a length delivery from Shardul Thakur towards the mid-wicket region.

It was looking a clear six but Sanju had other plans before the ball went over the boundary line. Samson made an extraordinary effort which is looking more and more beautiful even watching after plenty of times. Here we are attaching the video of the same at the below of this article.

Earlier in the match, after winning the toss, team India skipper Rohit decided to bat first at Bay Oval in Mount Maunganui. Meanwhile, in the first innings of the match, Team India managed to score 163-3 at the end of the 2oth over. From India, Rohit Sharma played a knock of 60 off just 41 balls and helped the team to set a target of 164.

In the reply, New Zealand could manage to score 156-9 at the end of the 20 overs. And hence lost the match by 7 runs in the fifth and final match of the T20 series. With this, team India made a historic series win over New Zealand by beating them with a margin of 5-0 at their home.