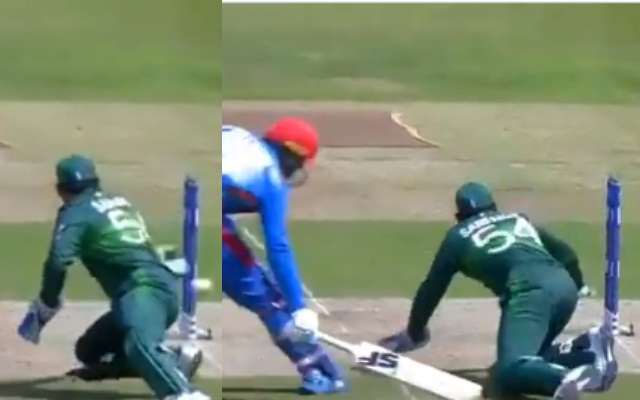 Indian former skipper MS Dhoni is known for his unorthodox wicket-keeping. Dhoni has raised the standards of wicket keeping level. And also he use his senses while standing behind the stumps. Nowdays, if someone is following unorthodox keeping style then they are seems to be imitate MS style.

Somehow Pakistan team manage to back in the competition for semi-finals, thanks to host team England. Now Pakistan team has good chance to qualify for the semi finals of ICC World Cup 2019. They have to just win the last game against Bangladesh at London on 5 July and wait for their luck.

During the Match-36, on the final ball of Afghanistan innings, Sarfraz did something, which is very funny to watch. Actually, he was flicking the bails from a distance and results in funny scene.

Afghanistan and Pakistan world cup match was full of excitements. After winning the toss Afghanistan decided to bat first, meanwhile, they set a target of 228 in front of Pakistan. The track was helpful for spinners, upon looking Afghanistan spin attack this was a fighting total. Afghanistan had almost beaten up Pakistan but due to some captaincy errors from Gulabadin the match ended in favor of Pakistan.

Pakistan won the match by 3 wickets with 2 balls left. Imad Wasim was awaded as ‘Man of the Match’ for his unbeaten 49 runs innings, which came in pressure situation.