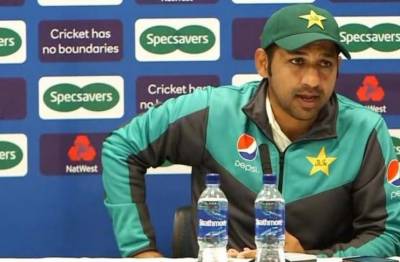 Pakistan captain Sarfaraz Ahmed faced an intense level criticism from the Pakistan press in a press conference after Pakistan’s national team was white-washed against their Asian counterpart Sri Lanka 3-0 in the recently concluded T20I series.

Pakistan was playing their first T20I series at home almost after 10 years under their newly elected coach Misbah-ul-Haq. It was a disappointment for the fans who had anticipated more than anyone and all bashed over the team’s performance on Social Media.

Sri Lanka played their inexperienced side under the captaincy of Dasun Shanaka surprised the cricket world with their stunning performance. The senior cricketers of Sri Lanka team had opted out of the Pakistan tour due to security concerns and based on the events occurred in past.

Although, Pakistan had defeated the Islanders in the One-Day series 2-0 after the first ODI was abandoned with rains interrupting. They could not continue their dominance in the shorter format with bringing their old players in who failed to give adequate results with the bat.

"You've disappointed the cricket fans so much that they've started cursing you. Who will come to see you play in the #NationalT20Cup?" – a journalist to Pak's Captain Sarfraz Ahmed

Irrespective of his form, this was very unprofessional.

[I do not own the rights to this video.] pic.twitter.com/5wzoRPY89r

Sarfraz Ahmed was on the hit-list of the press during a press conference where one of the Journalist asked in Hindi “Sarfraz Bhai aapne itna Mayus kiya hain saare cricket fans ko, ab aapko kon dekhne aayega agle World Cup mein” which literally meant,”Sarfaraz brother you have upset all the cricket fans, next year who will come to watch your game in the T20 World.”

All the Pakistan skipper could do was smile with his both hands under the chin. Pakistan finished fifth in the 2019 World Cup and missed their place in knock-outs with a poor run-rate below New Zealand. After the World Cup many former Pakistan players questioned on Sarfraz’s captaincy.

Pakistan cricket team will travel to Australia for a month to play 3 T20Is, and a couple of Test matches, the tour commences from November 1 with the first T20 to be played at Sydney Cricket Ground.