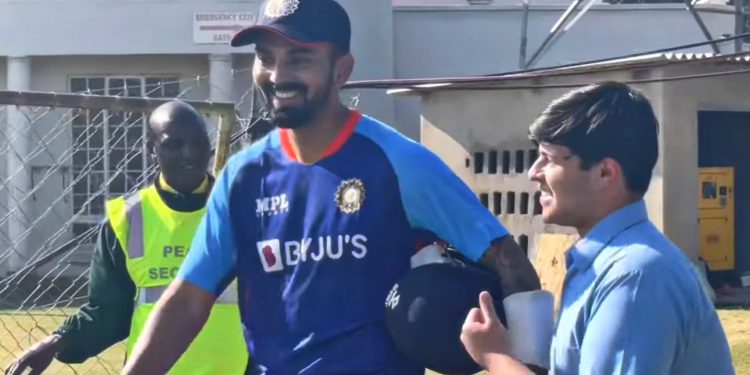 Team India is going to tour Zimbabwe for a 3-match ODI series and the first game of the same has already gone underway in Harare. KL Rahul has been appointed as the captain of the Indian team and the right-handed batsman is making his comeback after recovering from an injury. While interacting with the fans a day prior to the match, KL Rahul met a young boy and the Indian fan delivers an epic reply when asked whether he will come to watch the 1st ODI.

When the squad for the Zimbabwe tour was announced, Shikhar Dhawan was appointed as the captain, however, later KL Rahul was deemed fit for the tour and replaced Dhawan as the skipper. Team India players have been interacting with their fans ever since the West Indies tour and while doing the same before the first ODI, an Indian fan delivers an epic reply to KL Rahul’s query.

A teenager was amongst the fans who were in Harare to get the autographs and click selfies with their favourite cricketers. This teenage boy interacted with the skipper KL Rahul and mentioned that he is a big fan of the batsman. The boy also clicked photos with Rahul and the Indian fan delivers an epic reply when KL Rahul asked whether he will be coming the next day to witness the contest between India and Zimbabwe.

The young fan who was all so excited gave an amusing reply as he said, “Ayenge! School gaya bhaad me” which roughly translates to “Will come! To hell with school.” The Indian skipper was quick to correct the lad and asked him not to skip school. The young boy responded by saying that nothing important is going to happen in school on the match day anyway.

Kl Rahul will be looking to make a strong comeback and get into a rhythm as he was out of the field for a long period of time. The Indian team will look to dominate the Zimbabwe team and win the series 3-0, however, they can’t underestimate the side. A lot of youngsters are representing India in the series and have the opportunity to make a mark at the international level.