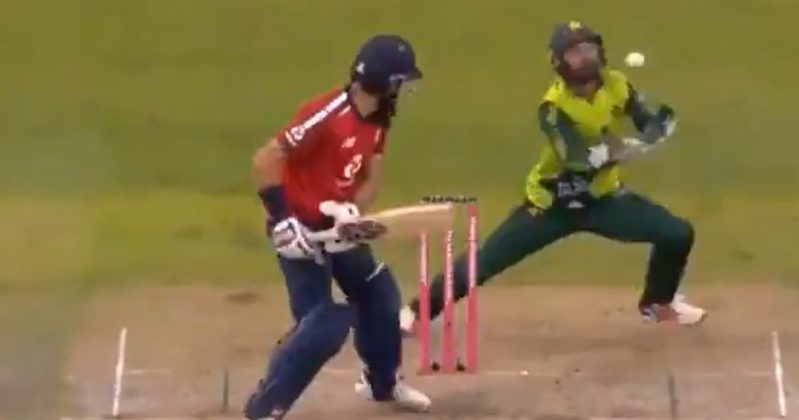 In a rather bizarre communication ploy, the Pakistan duo of wicket-keeper Mohammad Rizwan and bowler Shadab Khan decided on not communicating over what kind of a delivery to bowl at the batsman (England’s Moeen Ali). This left the bowler to come up with his own way of dismissing the batsman. Shadab Khan plotted a delivery for Moeen Ali’s dismissal after knowing the England batsman understood Urdu (a common communication medium between Pakistani cricketers).

Mohammad Rizwan Reveals Moeen Ali’s Urdu Understanding
It was at the first of three T20s between England and Pakistan played in Manchester. It was during the England innings when Pakistan keeper Mohamad Rizwan suggested to the bowler Shadab Khan to come up with his own delivery to dismiss the England batsman. The reason being, ‘Moeen Ali understands Urdu.’

Rizwan was heard saying on the stump microphone – “Isay khudi out krna isay urdu smjh ati hai (think for yourself on what to bowl, I will not tell. He knows urdu).” The bowler managed to deceive the English batsman with a slow delivery which the keeper latched onto on his second attempt. The dismissal ended Ali’s stay at the crease which lasted on 8 runs off 7 balls.

Shadab Khan Scalps 2 Wickets
Pakistan bowler Shadab Khan added 2 crucial England batsmen to his dismissal. First he got rid of the dangerous looking open Tom Banton who had played a 71 run knock off 42 deliveries. The second of Khan’s wicket was the cheap dismissal of Ali. We’d say, one that he plotted himself.

First T20 Called Off
The first T20 between England and Pakistan was abandoned after repeated showers left the outfield wet and unplayable. England had managed to reach 131/6 with Banton top scoring with 71. For Pakistan, Imad Wasim and Shadab Khan both picked two wickets each.

Focus now shifts to the second T20 on Sunday. Shadab Khan would definitely take in some positives over the dismissal of Moeen Ali. Perhaps, Ali could counter with something of this own, knowing there wont be any Urdu communication between the Pakistan players when he is out in the middle.