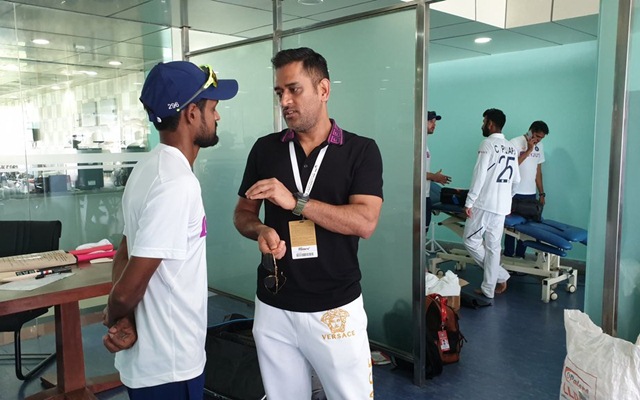 Meanwhile, after the win, Shahbaz Nadeem received a special moment with the former skipper MS Dhoni. As MS Dhoni just after the historic win over South Africa has visited the Indian dressing room. As we all know that MS Dhoni guidance has improved the performance of many cricketers in the past. And now Dhoni has given his special words to the debutant.

It was a special meeting for the debutant as he received some guidance from the legendary cricketer. Just after the win, BCCI has posted a picture on the twitter handle in which MS Dhoni was interacting with the debutant Shahbaz Nadeem.

Here is the picture shared by BCCI

In an exclusive interview given to Times of India, when Shahbaz was asked about what he was discussing with the former skipper as seen in the picture. Nadeem said it was just a normal talk in which he asked MS Dhoni to rate his performance, “I met him (Dhoni) after the match. I asked him, ‘Mahi Bhai how did I do?” he told.

In reply to the question of the left spinner, Dhoni felt that Nadeem has already attained the maturity level. And also there is no need to do any other experiments with his bowling.

“‘Shahbaz, you have matured now. I was watching you bowl. There is a maturity in your bowling now. That is because of your domestic experience. Just don’t experiment too much and play the way you have been playing. Your journey has started, Shahbaz.’ We chatted about our journeys,” the left-arm spinner told to TOI.

Earlier in the match, Shahbaz took four wickets against Proteas and helped the team in winning the series on the fourth day. Meanwhile, he took the last two wickets on the fourth day of the third test match. And also 30-year-old scalped the wickets of  Temba Bavuma, Anrich Nortje, Theunis de Bruyn and Lungi Ngidi in the final Test against Proteas.